Items related to The Making of the West: A Concise History, Volume I:... 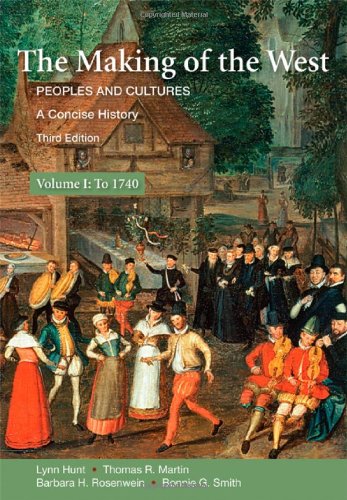 The Making of the West is a story of interactions — cross-cultural exchanges that span the globe, as well as the ongoing interactions between societies, cultures, governments, economies, religions, and ideas. To highlight these interactions and help students grasp the vital connections between political, social, and cultural events, The Making of the West: A Concise History presents a comprehensive picture of each historical era within a brief chronological narrative. The book also situates Europe within a truly global context, facilitating students’ understanding of the events that have shaped their own times. A full-color map and art program deepen students’ understanding of the narrative.

LYNN HUNT (Ph.D., Stanford University) is Eugen Weber Professor of Modern European History at University of California, Los Angeles. She is the author or editor of several books, including most recently Inventing Human Rights (2007) and Measuring Time, Making History (2008). She has in press a co-authored work on religious toleration in early eighteenth-century Europe.

THOMAS R. MARTIN (Ph.D., Harvard University) is Jeremiah O’Connor Professor in Classics at the College of the Holy Cross. He is the author of Sovereignty and Coinage in Classical Greece (1985) and Ancient Greece (1996, 2000) and is one of the originators of Perseus: Interactive Sources and Studies on Ancient Greece (www.perseus.tufts.edu). He is currently conducting research on the career of Pericles as a political leader in classical Athens as well as on the text of Josephus' Jewish War.

BARBARA H. ROSENWEIN (Ph.D., University of Chicago) is professor of history at Loyola University Chicago. She is the author or editor of several books including A Short History of the Middle Ages (2001; 2004; 2009) and Emotional Communities in the Early Middle Ages (2006). She is currently working on a general history of the emotions in the West.

BONNIE G. SMITH (Ph.D., University of Rochester) is Board of Governors Professor of History at Rutgers University. She is author or editor of several books including Ladies of the Leisure Class (1981); The Gender of History: Men, Women and Historical Practice (1998); and The Oxford Encyclopedia of Women in World History (2007). Currently she is studying the globalization of European culture and society since the seventeenth century.