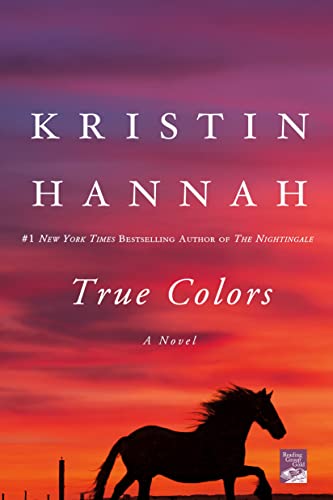 The Grey sisters had only each other when their mother died years ago. Their stern, unyielding father gave them almost no attention. Winona, the oldest, needs her father's approval most of all. An overweight dreamer, she never felt at home on the sprawling horse ranch that had been in her family for three generations. Aurora, the middle, is the peacemaker. Vivi Ann, the youngest, is the undisputed star of the family. Everything comes easily to Vivi Ann, her father's love most of all. But when Vivi Ann makes a fateful decision to follow her heart, rather than take the route of a dutiful daughter, events are set in motion that will test the love and loyalties of the Grey sisters. They will be pitted against each other in ways none could have imagined. Secrets will be revealed, and a terrible, shocking crime will shatter both the family and their beloved town. With breathtaking pace and penetrating insight, Kristin Hannah's True Colors is a novel about sisters, vengeance, jealousy, betrayal―and ultimately, what it truly means to be a family.

Kristin Hannah is the New York Times bestselling author of novels including Night Road, Firefly Lane, and Winter Garden. She was born in Southern California and moved to Western Washington when she was eight. A former lawyer, Hannah started writing when she was pregnant and on bed rest for five months. Writing soon became an obsession, and she has been at it ever since. She is the mother of one son and lives with her husband in the Pacific Northwest and Hawaii.

The day Vivi Ann had been waiting for—January 25— seemed to take forever to arrive. When it finally came, she woke even earlier than usual. Long before dawn had lightened the night sky, she threw back the covers and got out of bed. In the cold darkness of her room, she dressed in insulated coveralls and a woolen cap. Grabbing a pair of worn leather work gloves, she stepped into big rubber boots and went outside.

Technically she didn’t have to feed the horses. Her latest ranch hand would do it. But since she was too excited to sleep, she figured she might as well do something useful.

Without a moon to guide her, she couldn’t see anything except a ghostly silvered image of her own breath, but if therewas one thing Vivi Ann knew in this world, it was the lay of her father’s land.

More than one hundred years ago, her great- grandfather had homesteaded this property and founded the nearby town of Oyster Shores. Other men had chosen easier, more populated areas, places with easier access, but not Abelard Grey. He had crossed the dangerous plains to get here, lost one son to an Indian raid and another to influenza, but still he’d moved West, lured by a dream to this wild, secluded corner of the Evergreen State. The land he chose, one hundred and twenty- five acres tucked between the warm blue waters of the Hood Canal and a forested hillside, was spectacularly beautiful.

She walked up the small rise toward the barn they’d built ten years ago. Beneath a high, timbered ceiling, a large riding arena was outlined by four- rail fencing; twelve box stalls flanked the east and west sides of the structure. After she opened the huge sliding door, the overhead lights came on with a sound like snapping fingers, and the horses instantly became restless, whinnying to let her know they were hungry. For the next hour, she separated flakes of hay from the bales stacked in the loafing shed, piled them into the rusted wheelbarrow, and moved down the uneven cement aisles. At the last stall, a custom- made wooden sign identified her mare by her rarely used registered name: Clementine’s Blue Ribbon.

“Hey, girl,“ she said, unbolting the wooden door and sliding it sideways.

Clem nickered softly and moved toward her, sneaking a bite of hay from the wheelbarrow.

Vivi Ann tossed the two flakes into the iron feeding rack and closed the door behind her. While Clem ate, Vivi Ann stood beside her, stroking the big mare’s silky neck.

“Are you ready for the rodeo, girl?”

The mare nuzzled her side as if in answer, almost knocking Vivi Ann off her feet.

In the years since Mom’s death, Vivi Ann and Clementine had become inseparable. For a while there, when Dad had quit speaking and started drinking, and Winona and Aurora had been busy with high school, Vivi Ann had spent most of her time with this horse. Sometimes, when the grief and emptiness had been too much for Vivi Ann to handle, she’d slipped out of her bedroom and run to the barn, where she’d fall asleep in the cedar shavings at Clem’s hooves. Even after Vivi Ann had gotten older and become popular, she’d still considered this mare her best friend. The deepest of her secrets had been shared only here, in the sweet- smelling confines of the last box stall on the east aisle.

She patted Clem’s neck one last time and left the barn. By the time she reached the house, the sun was a smear of butterscotch-yellow light in the charcoal- gray winter sky. From this vantage point, she could see the steel-gray waters of the Canal and the jagged, snow-covered peaks of the distant mountains.

When she stepped into the shadowy farm house, she could hear the telltale creaking of floorboards and knew her father was up. She went into the kitchen, set three places at the table and then started breakfast. Just as she put a plate of pancakes into the oven to warm, she heard him come into the dining room. Pouring him a cup of coffee, doctoring it with sugar, she took it to him.

He took it from her without looking up from his Western Horseman magazine.

She stood there a moment, wondering what she could say that would start a conversation.

Dressed in his usual work clothes—well- worn Wrangler jeans and a plaid flannel shirt, with a saucer- sized silver belt buckle and leather gloves tucked in his waistband—he looked like he did every morning. And yet there was something different, too: a subtle collection of lines or wrinkles that aged his face.

The years since Mom’s death had been unkind to him, sharpening his features and adding shadows where none belonged, both in his eyes and in the fleshy bags beneath. His spine had curved; it was the mark of a farrier, he said, the natural result of a lifetime spent hammering nails into horses’ hooves, but loss had played a part in that curving of his spine, too. Vivi Ann was certain of it. The weight of an unexpected loneliness had reshaped him as surely as the hours he’d spent hunched at work. The only time he really stood tall anymore was when he was in public, and she knew how much it pained him to appear unbowed by his life.

He sat down at the table and read his magazine while Vivi Ann readied and served breakfast.

“Clem’s made some awesome practice runs this month,“ she said, taking her place across from him. “I really think we have a chance of winning the rodeo in Texas.”

“Mix them in with the hash browns. We’re out of bread.”

Dad sighed heavily, obviously irritated. He looked pointedly at the empty place setting on the table. “You seen Travis this morning?”

Vivi Ann glanced through the window toward the barn. There was no sign of their ranch hand anywhere. No tractor out and running, no wheelbarrow by the barn door. “I fed the horses already. He’s probably out fixing that fence.”

“You picked another winner with that one. If you’d quit res-cuin’ every hurt horse between here and Yelm, we wouldn’t need no help around here at all. And the truth is we can’t afford it.”

“Speaking of money, Dad... I need three hundred bucks for the rodeo this week and the coffee can is empty.”

“I had to use that money to pay the hay bill.”

“The tax bill just came, too.”

“So we’re in trouble,“ Vivi Ann said, frowning. She’d heard it before, of course, had always known there wasn’t much money, but for the first time, it really hit home. She understood suddenly why Winona was always harping about saving money for taxes. She cast an upward glance at her dad. He sat hunched forward, with his elbows on the table. Her sisters would have seen that as rude; Vivi Ann was sure she knew better. “Your back hurting you again?”

He didn’t answer, didn’t even acknowledge the question.

She got up, went into the kitchen, and got him some ibuprofen, setting the pills gently on the table between them.

His splayed farrier’s hand closed over them.

“I’ll find a way to get the money, Dad. And I’ll win this week. Maybe as much as two thousand bucks. Don’t you worry.”

They finished the rest of the meal in silence, with him reading his magazine. When he was done, he pushed back from the table and stood up. Reaching for the sweat- stained brown felt cowboy hat that hung on a hook by the door, he said, “Make me proud.”

After he left, Vivi Ann sat there, feeling unsettled.

For most of her twenty- four years she’d been like a leaf on the water, just floating along, following what ever current came her way. She’d tried changing direction a few times, but every attempt (like community college) had ended quickly, with her returning to this land.

She loved it here, plain and simple. She loved being around the horses, training them, and passing her expertise on to the bright- eyed girls who idolized her riding ability. She loved that everyone in town knew who she was and respected her and her family. She even loved the weather. Lots of folks complained about the gray days that followed each other, one after another, from November to April, but she didn’t mind at all. No rain, no rainbows. That was her motto, and had been since she was twelve years old, a girl standing beside a freshly dug grave, trying to make sense of an incomprehensible loss. Then, she’d told herself that life was short and having fun was what mattered.

Now, though, it was time for her to grow up. Water’s Edge needed her for once, instead of the other way around. She wasn’t sure exactly how to make a change. Business and planning were hardly her strong suits, but she was smarter than people gave her credit for being. All she had to do was think about it.

But first she needed to borrow three hundred dollars from one of her sisters.

She’d tell them it would be a good investment.

Winona liked running the show. Any show; every show. And not from the sidelines, either. In college, all it had taken was one constitutional law class, and she’d glimpsed her future. Now, at twenty- seven, she had her life pretty much as she wanted it. Not completely, of course (she was unmarried, not dating, childless, and struggling with her weight), but pretty much. She was far and away the most successful attorney in Oyster Shores. It was common knowledge that she was fair, opinionated, and smart. Everyone said she was a good person to have on your side. Winona valued her reputation almost as much as she did her education. Dad and Vivi Ann might wors...