Items related to How the Light Gets In: A Chief Inspector Gamache Novel... 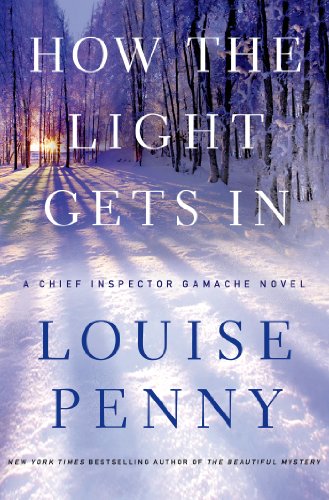 "There is a crack in everything. That's how the light gets in." ―Leonard Cohen

Christmas is approaching, and in Québec it's a time of dazzling snowfalls, bright lights, and gatherings with friends in front of blazing hearths. But shadows are falling on the usually festive season for Chief Inspector Armand Gamache. Most of his best agents have left the Homicide Department, his old friend and lieutenant Jean-Guy Beauvoir hasn't spoken to him in months, and hostile forces are lining up against him. When Gamache receives a message from Myrna Landers that a longtime friend has failed to arrive for Christmas in the village of Three Pines, he welcomes the chance to get away from the city. Mystified by Myrna's reluctance to reveal her friend's name, Gamache soon discovers the missing woman was once one of the most famous people not just in North America, but in the world, and now goes unrecognized by virtually everyone except the mad, brilliant poet Ruth Zardo.

As events come to a head, Gamache is drawn ever deeper into the world of Three Pines. Increasingly, he is not only investigating the disappearance of Myrna's friend but also seeking a safe place for himself and his still-loyal colleagues. Is there peace to be found even in Three Pines, and at what cost to Gamache and the people he holds dear?
How the Light Gets In is the ninth Chief Inspector Gamache Novel from Louise Penny.
One of Publishers Weekly's Best Mystery/Thriller Books of 2013
One of The Washington Post's Top 10 Books of the Year
An NPR Best Book of 2013


Audrey Villeneuve knew what she imagined could not possibly be happening. She was a grown woman and could tell the difference between real and imagined. But each morning as she drove through the Ville-Marie Tunnel from her home in east-end Montréal to her office, she could see it. Hear it. Feel it happening.
The first sign would be a blast of red as drivers hit their brakes. The truck ahead would veer, skidding, slamming sideways. An unholy shriek would bounce off the hard walls and race toward her, all-consuming. Horns, alarms, brakes, people screaming.
And then Audrey would see huge blocks of concrete peeling from the ceiling, dragging with them a tangle of metal veins and sinews. The tunnel spilling its guts. That held the structure up. That held the city of Montréal up.
Until today.
And then, and then … the oval of daylight, the end of the tunnel, would close. Like an eye.
And then, darkness.
And the long, long wait. To be crushed.
Every morning and each evening, as Audrey Villeneuve drove through the engineering marvel that linked one end of the city with another, it collapsed.
“It’ll be all right.” She laughed to herself. At herself. “It’ll be all right.”
She cranked the music louder and sang loudly to herself.
But still her hands on the steering wheel tingled, then grew cold and numb, and her heart pounded. A wave of slush whacked her windshield. The wipers swept it away, leaving a half moon of streaky visibility.
Traffic slowed. Then stopped.
Audrey’s eyes widened. This had never happened before. Moving through the tunnel was bad enough. Stopped in it was inconceivable. Her brain froze.
“It’ll be all right.” But she couldn’t hear her voice, so thin was her breath and so great the howl in her head.
She locked the door with her elbow. Not to keep anyone out, but to keep herself in. A feeble attempt to stop herself from flinging open the door and running, running, screaming out of the tunnel. She gripped the wheel. Tight. Tight. Tighter.
Her eyes darted to the slush-spattered wall, the ceiling, the far wall.
The cracks.
Dear God, cracks.
And the half-hearted attempts to plaster over them.
Not to repair them, but hide them.
That doesn’t mean the tunnel will collapse, she assured herself.
But the cracks widened and consumed her reason. All the monsters of her imagination became real and were squeezing out, reaching out, from between those faults.
She turned the music off so she could concentrate, hyper-vigilant. The car ahead inched forward. Then stopped.
“Go, go, go,” she pleaded.
But Audrey Villeneuve was trapped and terrified. With nowhere to go. The tunnel was bad, but what waited for her in the gray December sunlight was worse.
For days, weeks, months—even years, if she was being honest—she’d known. Monsters existed. They lived in cracks in tunnels, and in dark alleys, and in neat row houses. They had names like Frankenstein and Dracula, and Martha and David and Pierre. And you almost always found them where you least expected.
She glanced into the rearview mirror and met two frightened brown eyes. But in the reflection she also saw her salvation. Her silver bullet. Her wooden stake.
It was a pretty party dress.
She’d spent hours sewing it. Time she could have, should have, spent wrapping Christmas gifts for her husband and daughters. Time she could have, should have, spent baking shortbread stars and angels and jolly snowmen, with candy buttons and gumdrop eyes.
Instead, each night when she got home Audrey Villeneuve went straight to the basement, to her sewing machine. Hunched over the emerald green fabric, she’d stitched into that party dress all her hopes.
She would put it on that night, walk into the Christmas party, scan the room and feel surprised eyes on her. In her clingy green dress, frumpy Audrey Villeneuve would be the center of attention. But it wasn’t made to get everyone’s attention. Just one man’s. And when she had that, she could relax.
She’d hand over her burden, and get on with life. The faults would be repaired. The fissures closed. The monsters returned to where they belonged.
The exit to the Champlain Bridge was in sight. It wasn’t what she normally took, but this was far from a normal day.
Audrey put on her signal and saw the man in the next car give her a sour look. Where did she think she was going? They were all trapped. But Audrey Villeneuve was more trapped. The man gave her the finger, but she took no offense. In Québec it was as casual as a friendly wave. If the Québécois ever designed a car, the hood ornament would be a middle finger. Normally she’d give him a “friendly wave” back, but she had other things on her mind.
She edged into the far right lane, toward the exit to the bridge. The wall of the tunnel was just feet away. She could have stuck her fist into one of the holes.
“It’ll be all right.”
Audrey Villeneuve knew it would be many things, but all right probably wasn’t one of them.

How the Light Gets In: A Chief Inspector Gamache Novel

How the Light Gets In: A Chief Inspector Gamache Novel

How the Light Gets in (Hardback or Cased Book)

How the Light Gets In