Items related to The Bedford Anthology of American Literature, Volume...

The Bedford Anthology of American Literature, Volume Two: 1865 to the Present 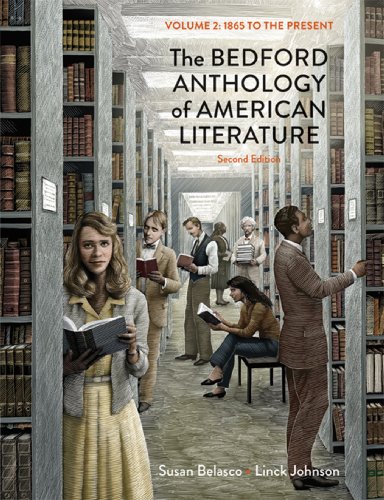 SUSAN BELASCO (Ph.D., Texas A&M University), professor of English and women’s studies at the University of Nebraska, Lincoln, has taught courses in writing and American literature at several institutions since 1974. The editor of Margaret Fuller’s Summer on the Lakes and Fanny Fern’s Ruth Hall, she is also the coeditor of three collections of essays: Approaches to Teaching Stowe’s "Uncle Tom’s Cabin,"Periodical Literature in Nineteenth-Century America, and Leaves of Grass: The Sesquicentennial Essays. The editor of "Walt Whitman’s Periodical Poetry" for the Walt Whitman Archive (whitmanarchive.org), she is the current president of the Research Society for American Periodicals.

LINCK JOHNSON (Ph.D., Princeton University), the Charles A. Dana Professor of English at Colgate University, has taught courses in writing and American literature and culture since 1974. He is the author of Thoreau’s Complex Weave: The Writing of "A Week on the Concord and Merrimack Rivers," with the Text of the First Draft, the Historical Introduction to A Week in the Princeton University Press edition of the Writings of Henry D. Thoreau, and numerous articles and contributions to books. The recipient of a National Endowment for the Humanities Fellowship at the American Antiquarian Society, he is a member of the Editorial Board of the Collected Works of Ralph Waldo Emerson and ESQ: A Journal of the American Renaissance.

"I can see myself teaching almost everything included here. Not only is the anthology representative, but it also serves to focus on some of the chief issues in early American studies today."
— Rosemary Fithian Guruswamy, Radford University "My overall reaction to this anthology is that it is one of the most thoughtfully organized and written anthologies of American literature that I have seen in recent years. Rich in visual materials, which are especially effective for an undergraduate audience, it is equally fulfilling in the content and choice of selections." — Sharon M. Harris, University of Connecticut "I admire this anthology a great deal. But what recommends it, finally, is not simply its economies but the acuity of its choices, the unobtrusive depth of its learning, and its pedagogical and historical imaginativeness." — Richard Millington, Smith College "Susan Belasco and Linck Johnson have done a fine job conceptualizing a kind of American literature anthology not currently available. Their focused attention to reading, writing and print culture will remind students (and all of us) of the significance of literature as a way of knowing. As I read I also considered whether the introductory American survey I teach would need significant revision if I were to use an anthology like this one. I found I could teach my course with their book." — Pattie Cowell, Colorado State University "In sum, this text offers the best view of the cultural mosaic that is ‘American Literature’ that I have ever seen. I love the clear organization, and the various helpful apparati, especially the historical contextualizations of a work’s particular ‘place and time.’" — Thomas Gannon, University of Nebraska "I found this to be an excellent anthology, well-conceived and very well selected and edited, with some features that make it distinctive in the very crowded field of American literature anthologies. Its selectivity (resisting the imperative to include everything, as many modern American literature anthologies do) is a real virtue. I recommend it highly." — David M. Robinson, Oregon State University

1. The Bedford Anthology of American Literature, Volume Two: 1865 to the Present

2. The Bedford Anthology of American Literature, Volume Two: 1865 to the Present

3. 2: The Bedford Anthology of American Literature, Volume Two: 1865 to the Present

4. The Bedford Anthology of American Literature, Volume Two: 1865 to the Present