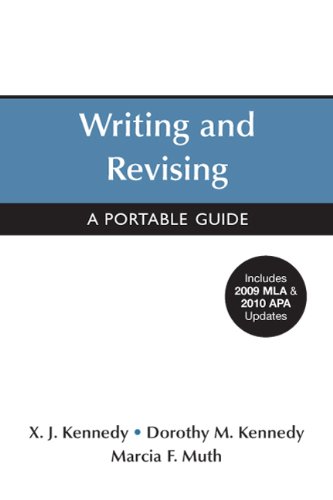 X. J. KENNEDY is an acclaimed poet, children's writer, college teacher, and textbook author. He has taught freshman composition at the University of Michigan, the University of North Carolina at Greensboro, and Tufts University. Since 1966, more than two million students have treasured his introductory literature texts; The Bedford Guide for College Writers, coauthored with Dorothy M. Kennedy, Marcia F. Muth, and Sylvia A. Holladay, now in its seventh edition (Bedford/St. Martin's, 2005); and The Bedford Reader, coedited with Dorothy M. Kennedy and Jane E. Aaron, now in its eighth edition (Bedford/St. Martin's, 2006).

DOROTHY M. KENNEDY is a writer and editor whose articles and reviews have appeared in both professional and academic journals. She has taught composition at the University of Michigan and Ohio University and, with X. J. Kennedy, is the recipient of the NCTE Teacher's Choice Award for Knock at a Star: A Child's Introduction to Poetry.

MARCIA F. MUTH teaches, writes, and edits. She has taught first-year composition at The Ohio State University and now offers writing workshops through the School of Education at the University of Colorado at Denver. She is the author or coauthor of several composition textbooks and ancillaries, including The Bedford Guide for College Writers, Seventh Edition (Bedford/St. Martin's, 2005), Researching and Writing: A Portable Guide (Bedford/St. Martin's, 2006), and Harold D. Lasswell: An Annotated Bibliography. Her various projects as a writer and editor have included many grant proposals, textbooks, reports, and other publications.