Items related to The Path of Daggers (The Wheel of Time, Book 8) (Wheel... 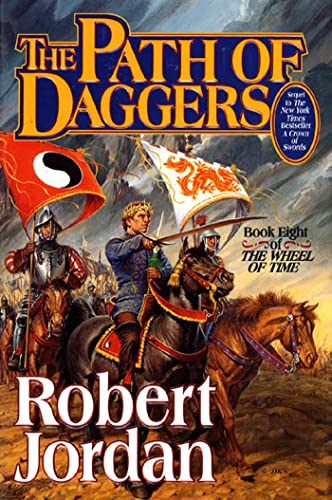 The Seanchan invasion force is in possession of Ebou Dar. Nynaeve, Elayne, and Aviendha head for Caemlyn and Elayne's rightful throne, but on the way they discover an enemy much worse than the Seanchan.

In Illian, Rand vows to throw the Seanchan back as he did once before. But signs of madness are appearing among the Asha'man.

In Ghealdan, Perrin faces the intrigues of Whitecloaks, Seanchan invaders, the scattered Shaido Aiel, and the Prophet himself. Perrin's beloved wife, Faile, may pay with her life, and Perrin himself may have to destroy his soul to save her.

Meanwhile the rebel Aes Sedai under their young Amyrlin, Egwene al'Vere, face an army that intends to keep them away from the White Tower. But Egwene is determined to unseat the usurper Elaida and reunite the Aes Sedai. She does not yet understand the price that others--and she herself--will pay.

Robert Jordan's bestselling Wheel of Time epic is one of the most popular fantasy series of all time for a reason. Jordan's world is rich and complex, and he's assembled an endearing, involving core of characters while mapping out an ambitious and engaging story arc.

But with the previous book, Crown of Swords, and now with Path of Daggers, the series is in a bit of a holding pattern. Path continues the halting gait of the current plot line: Rand is still on the brink of losing it, all the while juggling the political machinations around him and again taking to the field against the Seanchan. The rest of the Two Rivers kids and company don't seem to be moving much faster. Egwene continues to slowly consolidate her hold as the "true" Amyrlin (finally getting closer to Tar Valon and the inevitable confrontation with Elaida), and Nynaeve and Elayne keep on wandering toward the Lion Throne, again on the run from the Seanchan. Mat Cauthon is barely mentioned, and fellow ta'veren Perrin keeps busy with politics in Ghealdan. The ending does provide promise, though, that book nine might match the pace and passion of the previous books.

If you're already hooked, you could sooner overcome a weave of Compulsion than avoid picking up a copy of Path of Daggers. But if you're new to the series, start at the beginning with the engrossing, much-better-paced Eye of the World. --Paul Hughes

The Wheel of Time turns, and Ages come and pass. What was, what will be, and what is, may yet fall under the Shadow. Let the Dragon ride again on the winds of time.

THE WHEEL OF TIME

Wheel of Time 8: The Path of Daggers (Reissue)

The Path of Daggers Format: Hardcover

The Path of Daggers (The Wheel of Time, Book 8)

The Path of Daggers (The Wheel of Time, Book 8) Hardcover

The Path of Daggers (Hardback or Cased Book)