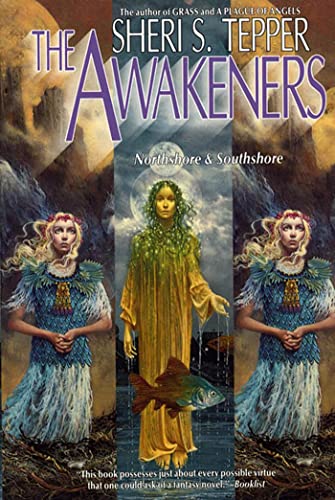 Come to the world of the River.

Come to a world distant in time and space, a world where the pace of life is counted by tides of the great River, but where, as in the river itself, there are swift dark currents flowing under a placid surface.

Meet Pamra Don--a young woman scarred by her mother's death, lured to a preist-hood where the truth must be hidden from the faithful. And meet Thrasne, a young boatman who trades from town to town, free from the iron control of the towers of the Awakeners, and the priests of the world of the River--free, that is, as long as he never speaks his mind. These two, by design and accident both, are about to discover many truths. And on the Northshore of the River, the truth can kill you.

Sheri S. Tepper was born in 1929. She began her career as a writer composing children's stories, and published her first adult book in 1982. In 1991, her novel Beauty won the Locus Award for Best Fantasy Novel. She currently lives on a ranch in Larkspur, Colorado.