Items related to Lords of the Land

Braun, Matt Lords of the Land

Lords of the Land 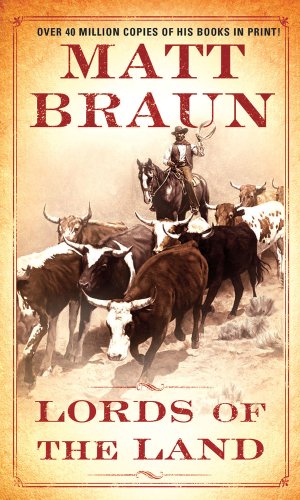 Matt Braun
Lords of the Land

Hank Laird had never laid claim to sainthood. Truth is, his enemies would be quick to swear that the man was the devil himself-a reputation Laird earned as one of the most hardscrabble men ever to grace the soil of South Texas.

With grit, gold and gunpowder, he forged an empire out of chaos in the wake of the Civil War. But now the vultures are coming home to roost-and it's up to Laird whether Santa Guerra ranchlands will be heaven or hell.

Matt Braun is a fourth-generation Westerner, steeped in the tradition and lore of the frontier era. His books reflect a heritage rich with the truths of that bygone time. Raised among the Cherokee and Osage tribes, Braun learned their traditions and culture, and their philosophy became the foundation of his own beliefs. Like his ancestors, he has spent most of his life wandering the mountains and plains of the West. His heritage and his contribution to Western literature resulted in his appointment by the Governor of Oklahoma as a Territorial Marshal.

Braun is the author of more than forty novels and four nonfiction works, including Black Fox, which was made into a CBS miniseries, and One Last Town, which was made into a TNT movie called You Know My Name. Western Writers of America awarded Braun the prestigious Golden Spur Award for The Kincaids. He is also the recipient of the Cowboy Spirit Award and was inducted into the Cowboy Hall of Fame in 1999.

“Braun is one of the best!” ―Don Coldsmith, author of the Spanish Bit series

1. Lords of the Land

2. Lords of the Land

3. Lords of the Land

4. Lords of the Land