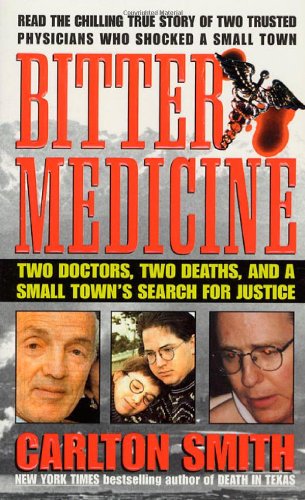 Two Deaths
Port Angeles, Washington, is a small town of pretty houses and smiling people, surrounded by acres of pristine wilderness. Everyone thought it was the perfect place to live...until two local doctors made headlines.

Two Doctors
On a chilly January night, Dr. Eugene Turner hastened the death of a three-day-old baby boy who had been pronounced brain-dead. Six weeks later, ER physician Dr. Bruce Rowan hacked his wife to death with an axe, then tried to kill himself--claiming he snapped after witnessing Dr. Turner's euthanasia.

A Small Town Rocked by A Shocking Fatality
What really happened? What drove Dr. Bruce Rowan--a man who was entrusted to heal the sick--to so savagely take the life of his own wife? Acquitted by reason of insanity, Dr. Rowan was committed to a mental institution. And thought the trial is over, some fascinating ethical and legal questions have been raised by its outcome.

Now, bestselling true crime writer Carlton Smith reveals the never-before-told facts and the stunning truth behind two doctors, two deaths, a surprising trial, and the picturesque town standing in the shadow of a ghastly killing.

CARLTON SMITH is the New York Times bestselling author of The Search for the Green River Killer. An award-winning journalist for The Los Angeles Times and The Seattle Times during the 1970s and 1980s, he was a finalist for the Pulitzer Prize in investigative reporting in 1988, and now works full-time as a true crime author. There are more than two million copies of his books in print. He lives in Reno, Nevada.