Unspoken Desires: Real People Talk About Sexual Experiences and Fantasies They Hide from Their Partners 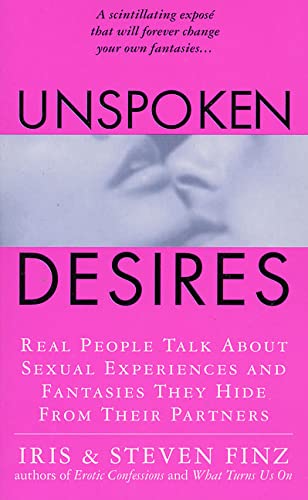 Iris and Steven Finz have the uncanny knack of getting people to talk about intimate details of their sex lives. For more than a decade, they have been interviewing people from all segments of society and, with the permission of their subjects, passing the stories along to their readers.

In all, they present a total of 29 stories that are likely to change your ideas about what is normal and what nice people do.

Still another volume of sexual fantasies, helpfully subdivided into threesomes, prostitution, exhibitionism, etc., from the apparently insatiable Finzes (Erotic Confessions, 1998, etc.). A construction worker who lets a charity auction off six hours of his time ends up serving as a sex slave to three women; a flat-chested young woman passes herself off as an unshirted male on a public beach; a peeping Tom is discovered (by his wife) watching a neighboring couple through a telescope. No, it's not Penthouse Forum; it's a group of two dozen forbidden fantasiesmost of them (if the authors are to be believed) acted out in real lifethat the Finzes have brought together to show us that our own most secret longings are not so unusual after all. If the analysis provided by the Finzes doesn't cut much deeper than what you'd likely find at your local hairdresser or barber shop, it has to be said that the people who get their hair cut alongside you probably aren't nearly so forthcoming about their erotic fantasies (although the Finzes suspect they have fantasies of their own). ``We will not attempt to offer any explanation for the attractions our informants described,'' they sagely warn in introducing their chapter on garment fetishes (a woman who cherishes memories of her leather orgies as a biker, a maintenance worker who collects panties from the college dorms he works in). Their sole therapeutic recommendation: Consider sharing your fantasies with your mate. Or, better yet (in a stunning example of the closed feedback loop), send them to the Finzes, who supply their Website, e-mail, and snail-mail addresses so that you can help them work on their next installment. The ideal pillow book for readers who, caught up in the authors' bland assurances that there's nothing wrong with fantasies, don't stop to think about how sleazy the Finzes' own project is. -- Copyright ©2000, Kirkus Associates, LP. All rights reserved.

1. Unspoken Desires: Real People Talk About Sexual Experiences and Fantasies They Hide from Their Partners

2. Unspoken Desires: Real People Talk About Sexual Experiences and Fantasies They Hide from Their Partners Finz, Iris and Finz, Steven

4. Unspoken Desires: Real People Talk About Sexual Experiences and Fantasies They Hide from Their Partners