Items related to Against All Odds: Escape from Sierra Leone

Ashby, Phil Against All Odds: Escape from Sierra Leone

Against All Odds: Escape from Sierra Leone 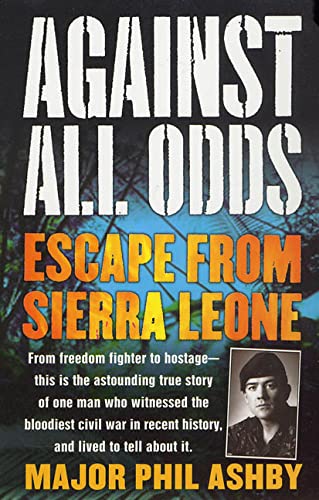 In West Africa's War-Ravaged Sierra Leone No On e Was Getting Out Alive.

It Took the Courage of One Man to Change the Odds.

By 1990, Sierra Leone, once hailed as the 'Athens of West Africa', had degenerated into a savage battlefield, overtaken by rebel forces in a devastating civil war. Assigned to spearhead the mission as UN peacekeeper was Major Phil Ashby. But by 2000, the rebel occupation he had worked so diligently to disarm rose again to control an astounding two-thirds of the country. The enemy's mission: get rid of the outside opposition first. A number of Ashby's colleagues were tortured and finally butchered, and more than 500 were taken as hostages. Among the hostages was Phil Ashby. Miles from civilization, with no rescue in sight, Ashby and three of his men knew that their fate was up to them alone. Lost deep inside the rebels' heartland, unarmed, and outnumbered 20-to-1, Ashby devised a plan to escape from the hostile jungles that would test fate and challenge all reason. They should have been doomed.

Against All Odds is the incredible true story of that escape-and of the heart-pounding courage of Major Phil Ashby who defeated the rebel forces of Sierra Leone and became a living testament to the power of the human spirit and the sheer determination to survive.

These bright blue badges are a symbol of UN neutrality and supposed to guarantee the safety of the person who wears them, but all they will do is make us show up more easily in the dark... We are no longer Observers. From now on, despite being unarmed, we are combatants.

Andy, Dave and Paul have only known me a few days. I ask them to trust me. We have no more preparations to make, and there seems little point in waiting any longer. I suggest we go now, and the others agree. I whisper "Good luck guys. Stay close behind me." Then I climb over the wall and drop into no man's land...

"An astute assessment of the perils of 'peacekeeping'."-Daily Mirror (four star review)

"What kind of a bloke goes for a run up a Scottish mountainside with his fiancée and their chaplain on the eve of their marriage and makes an off-color remark about how he hopes his missus-to-be will not be quite so sweet the next morning? Then gets held down in an SAS arm-lock by the vicar while his betrothed 'pushed my face in the mud'? The kind of bloke you want on your side."-Evening Standard

Phil Ashby was born in Scotland in 1970. He joined the Royal Marines at the age of seventeen as a Second Lieutenant, the youngest commissioned officer in HM Forces. Having completed his Arctic Warfare training, and earned his Green Beret, he was sponsored by the Marines to attend Pembroke College, Cambridge. He met his future wife, Anna, there on Valentine's Day 1991. On leaving the university, he served in Alaska, Brunei, Central America, Cyprus, Hong Kong, Northern Ireland, and Norway, and then undertook a year of specialist training as a Royal Marines Mountain Leader, the longest and hardest specialist infantry course in the British armed forces. In 1999, he was promoted to Major, the youngest person to hold that rank in the whole of the armed forces, and was posted to Sierra Leone. He was awarded the Queen's Gallantry Medal for his dramatic escape from rebel forces there. He is currently studying for a Master's degree in Defense Technology.

1. Against All Odds: Escape from Sierra Leone

2. Against All Odds: Escape from Sierra Leone

3. AGAINST ALL ODDS: ESCAPE FROM SI