Items related to Outliers: The Story of Success

Outliers: The Story of Success 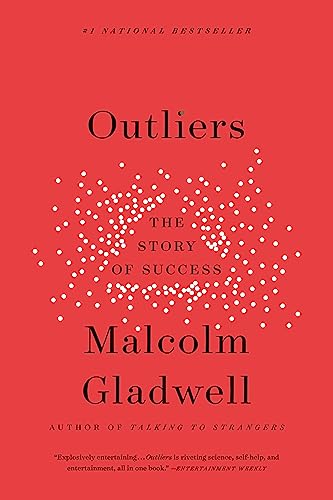 In this stunning new book, Malcolm Gladwell takes us on an intellectual journey through the world of "outliers"--the best and the brightest, the most famous and the most successful. He asks the question: what makes high-achievers different?

His answer is that we pay too much attention to what successful people are like, and too little attention to where they are from: that is, their culture, their family, their generation, and the idiosyncratic experiences of their upbringing. Along the way he explains the secrets of software billionaires, what it takes to be a great soccer player, why Asians are good at math, and what made the Beatles the greatest rock band.

Brilliant and entertaining, Outliers is a landmark work that will simultaneously delight and illuminate.

Amazon Best of the Month, November 2008: Now that he's gotten us talking about the viral life of ideas and the power of gut reactions, Malcolm Gladwell poses a more provocative question in Outliers: why do some people succeed, living remarkably productive and impactful lives, while so many more never reach their potential? Challenging our cherished belief of the "self-made man," he makes the democratic assertion that superstars don't arise out of nowhere, propelled by genius and talent: "they are invariably the beneficiaries of hidden advantages and extraordinary opportunities and cultural legacies that allow them to learn and work hard and make sense of the world in ways others cannot." Examining the lives of outliers from Mozart to Bill Gates, he builds a convincing case for how successful people rise on a tide of advantages, "some deserved, some not, some earned, some just plain lucky."

Outliers can be enjoyed for its bits of trivia, like why most pro hockey players were born in January, how many hours of practice it takes to master a skill, why the descendents of Jewish immigrant garment workers became the most powerful lawyers in New York, how a pilots' culture impacts their crash record, how a centuries-old culture of rice farming helps Asian kids master math. But there's more to it than that. Throughout all of these examples--and in more that delve into the social benefits of lighter skin color, and the reasons for school achievement gaps--Gladwell invites conversations about the complex ways privilege manifests in our culture. He leaves us pondering the gifts of our own history, and how the world could benefit if more of our kids were granted the opportunities to fulfill their remarkable potential. --Mari Malcolm

Malcolm Gladwell is the author of five New York Times bestsellers: The Tipping Point, Blink, Outliers, What the Dog Saw, and David and Goliath. He is also the co-founder of Pushkin Industries, an audio content company that produces the podcasts Revisionist History, which reconsiders things both overlooked and misunderstood, and Broken Record, where he, Rick Rubin, and Bruce Headlam interview musicians across a wide range of genres. Gladwell has been included in the Time 100 Most Influential People list and touted as one of Foreign Policy's Top Global Thinkers.

1. Outliers: The Story of Success

2. Outliers: The Story of Success

3. Outliers: The Story of Success

4. Outliers: The Story of Success

5. Outliers: The Story of Success

6. Outliers: The Story of Success

7. Outliers: The Story of Success

8. Outliers: The Story of Success (Paperback or Softback)

9. Outliers: The Story of Success

10. Outliers: The Story of Success