Items related to Different Mirror: A History Of Multicultural America 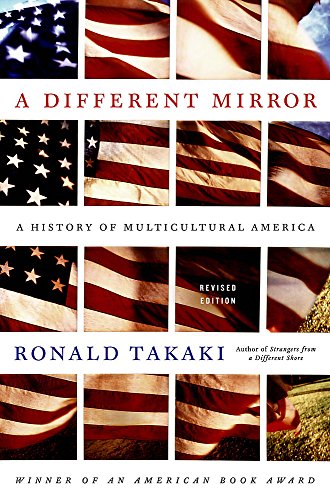 The "brilliant revisionist history of America" (Publishers Weekly) that dramatically retells our nation's story from the perspective of minorities.
Upon its first publication, A Different Mirror was hailed by critics and academics everywhere as a dramatic new retelling of our nation's past. Beginning with the colonization of the New World, it recounted the history of America in the voice of the non-Anglo peoples of the United States--Native Americans, African Americans, Jews, Irish Americans, Asian Americans, Latinos, and others--groups who helped create this country's rich mosaic culture.

Now, Ronald Takaki has revised his landmark work and made it even more relevant and important. Among the new additions to the book are:

--The role of black soldiers in preserving the Union
--The history of Chinese Americans from 1900-1941
--An investigation into the hot-button issue of "illegal" immigrants from Mexico
--A look at the sudden visibility of Muslim refugees from Afghanistan.

This new edition of A Different Mirror is a remarkable achievement that grapples with the raw truth of American history and examines the ultimate question of what it means to be an American.

Ronald Takaki designed and led the Ethnic Studies Ph.D. program at the University of California, Berkley until his retirement in 2004. He is the author of six books, including Strangers from a Different Shore. He lives in Berkeley, California.

A valuable survey of the American experience of several racial and ethnic minorities: readable popular history in the mode of Takaki's Strangers from a Different Shore (1989). Most multicultural histories focus on a single group and target a special-interest audience, but Takaki (Ethnic Studies/UC at Berkeley) opens the door wider by bringing together the viewpoints of Native Americas, Africans, Mexicans, Irish, Chinese, Japanese, and Jews, along with the changing attitudes of the ``civilized'' colonizing English and, later, WASP establishment. To the author, the ruling class incorrectly conceptualized America for centuries as a white country (``the lovely White,'' in Benjamin Franklin's words), only really confronting American racism after Hitler demonstrated where such ideology could lead. As in his Iron Cages (1979), Takaki avoids looking at groups in isolation: He stresses underlying cultural themes (the repeated debate among whites about whether racial ``inferiority'' is due to nature or nurture; the ruling class's strategy of appealing to race to thwart alliances of ``the giddy multitude'' of laborers and landless poor), as well as intergroup relations and mutual visions, both positive (a Mexican-Japanese labor alliance) and negative (the Irish--whose treatment by the English made them identify strongly with African-Americans--almost immediately adopted attitudes of racial superiority in the US). Along with standard historical sources, Takaki uses folk songs, poetry, and memoir to evoke the words and feelings of ordinary people. Condensing centuries of history into a chapter or two for each group unavoidably leads to oversimplification and occasionally familiar material; still, an excellent jumping-off place, with bibliographic notes pointing the way for further reading. (Photographs--not seen) -- Copyright ©1993, Kirkus Associates, LP. All rights reserved.

A Different Mirror: A History of Multicultural America

A Different Mirror: A History of Multicultural America

A Different Mirror: A History of Multicultural America (Paperback or Softback)