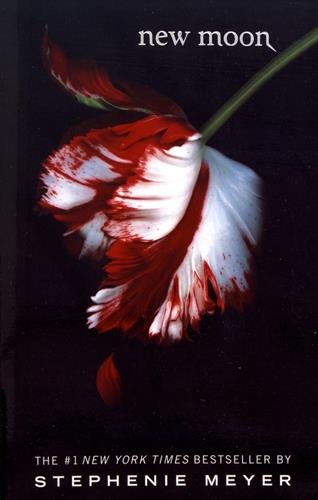 With 160 million copies of the Twilight Saga sold worldwide, this addictive love story between a teenage girl and a vampire redefined romance for a generation. For readers hungry for more, here is book two.
For Bella Swan, there is one thing more important than life itself: Edward Cullen. But being in love with a vampire is even more dangerous than Bella could ever have imagined. Edward has already rescued Bella from the clutches of one evil vampire, but now, as their daring relationship threatens all that is near and dear to them, they realize their troubles may be just beginning.

Bella and Edward face a devastating separation, the mysterious appearance of dangerous wolves roaming the forest in Forks, a terrifying threat of revenge from a female vampire and a deliciously sinister encounter with Italy's reigning royal family of vampires, the Volturi.

Passionate, riveting, and full of surprising twists and turns, this vampire love saga is well on its way to literary immortality.

"People do not want to just read Meyer's books; they want to climb inside them and live there."-Time

Stephenie Meyer is the author of the #1 bestselling Twilight Saga and The Host. She graduated from Brigham Young University with a degree in English literature, and she lives with her husband and three young sons in Arizona.

Readers will thrill to Ilyana Kadushin's elegant narration of NEW MOON, sequel to TWILIGHT. Her performance captures the emotional upheaval of mortal Bella's desperate love for vampire Edward and the obstacles to their perilous reunion. Like Romeo and Juliet, Edward and Bella suffer from their own folly, as well as the disapproval of their families. Kadushin's silvery, feminine voice delivers the unfolding events with precise, consistent timing, showcasing Meyer's story without overwhelming it. While the male characters could be slightly more distinct, the dialogue is clear as are Bella's numerous internal monologues. Kadushin ably succeeds at creating an addictive listen from Meyer's tumultuous story of star-crossed lovers. The combination will not disappoint. C.A. © AudioFile 2007, Portland, Maine-- Copyright © AudioFile, Portland, Maine