Items related to The Last Wish: Introducing The Witcher 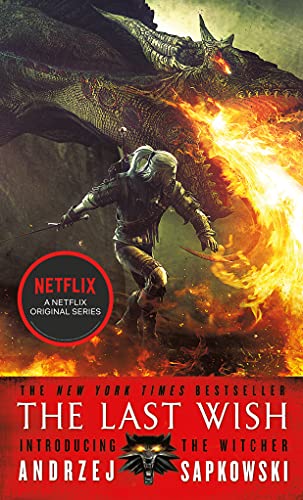 Soon to be a major Netflix original series!
Geralt the Witcher -- revered and hated -- holds the line against the monsters plaguing humanity in this collection of adventures in the NYT bestselling series that inspired the blockbuster video games.
Geralt is a Witcher, a man whose magic powers, enhanced by long training and a mysterious elixir, have made him a brilliant fighter and a merciless assassin. Yet he is no ordinary murderer: his targets are the multifarious monsters and vile fiends that ravage the land and attack the innocent.
But not everything monstrous-looking is evil and not everything fair is good...and in every fairy tale there is a grain of truth.
Andrzej Sapkowski, winner of the World Fantasy Lifetime Achievement award, started an international phenomenon with his Witcher series. The Last Wish short story collection is the perfect introduction to this one of a kind fantasy world.

Witcher collectionsThe Last WishSword of Destiny
Witcher novelsBlood of Elves
The Time of Contempt
Baptism of Fire The Tower of SwallowsLady of the LakeSeason of Storms
The Malady and Other Stories: An Andrzej Sapkowski Sampler (e-only)

Andrzej Sapkowski was born in 1948 in Poland. He studied economy and business, but the success of his fantasy cycle about the sorcerer Geralt of Rivia turned him into a bestselling writer. He is now one of Poland's most famous and successful authors.

Book Description Paperback. Condition: New. Orbit in the US. Language: English. Brand new Book. Geralt the Witcher--revered and hated--holds the line against the monsters plaguing humanity in this collection of adventures, the first chapter in Andrzej Sapkowski's groundbreaking epic fantasy series that inspired the hit Netflix show and the blockbuster video games. Geralt is a Witcher, a man whose magic powers, enhanced by long training and a mysterious elixir, have made him a brilliant fighter and a merciless hunter. Yet he is no ordinary killer. His sole purpose: to destroy the monsters that plague the world. But not everything monstrous-looking is evil and not everything fair is good . . . and in every fairy tale there is a grain of truth. Witcher collections The Last Wish Sword of Destiny Witcher novels Blood of Elves The Time of Contempt Baptism of Fire The Tower of Swallows Lady of the Lake Season of Storms Hussite Trilogy The Tower of Fools Warriors of God Translated from original Polish by Danusia Stok. Seller Inventory # ABZ9780316029186