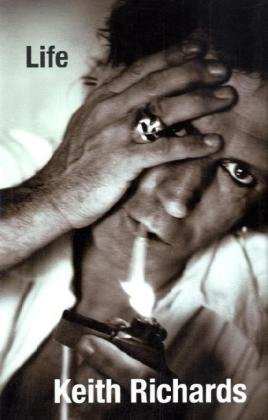 The long-awaited autobiography of the guitarist, songwriter, singer, and founding member of the Rolling Stones. Ladies and gentlemen: Keith Richards.

With The Rolling Stones, Keith Richards created the songs that roused the world, and he lived the original rock and roll life.

Now, at last, the man himself tells his story of life in the crossfire hurricane. Listening obsessively to Chuck Berry and Muddy Waters records, learning guitar and forming a band with Mick Jagger and Brian Jones. The Rolling Stones's first fame and the notorious drug busts that led to his enduring image as an outlaw folk hero. Creating immortal riffs like the ones in "Jumping Jack Flash" and "Honky Tonk Women." His relationship with Anita Pallenberg and the death of Brian Jones. Tax exile in France, wildfire tours of the U.S., isolation and addiction. Falling in love with Patti Hansen. Estrangement from Jagger and subsequent reconciliation. Marriage, family, solo albums and Xpensive Winos, and the road that goes on forever.

With his trademark disarming honesty, Keith Richard brings us the story of a life we have all longed to know more of, unfettered, fearless, and true.

Amazon Best Books of the Month, November 2010: It's hard to imagine a celebrity memoir--or any memoir for that matter--that is as easy to drink in (so to speak) as Keith Richards's Life. Die-hard Stones fans will love tales of the band's ascension from the "interval" band at the Marquee to the headliners at Super Bowl XL; guitar gearheads will scramble to sample the one lick that has eluded Richards for 49 years; and historians and romantics alike will swoon over the raspy, rambling, raucous detail of this portrait of the artist in situ. Yes, some tales are told, but Life is refreshingly not gossipy, mean-spirited, or sordid--or at least not more than the truth demands. Richards is as comfortable in his bones as a worn pair of boots, and Life captures the rhythm of his voice so effortlessly that reading his tale is like sharing a pint with an old friend--one who happens to be one of the most iconic guitarists of all time. --Daphne Durham

Keith Richards was born in London in 1943. A guitarist, vocalist, songwriter, and cofounder of the Rolling Stones, he has also released solo albums with his band, The X-Pensive Winos. He lives in Connecticut with his wife, Patti Hansen.

James Fox was born in Washington, D.C., in 1945 and has known Keith Richards since the early 1970's when he was a journalist for the Sunday Times in London. His books include the international bestseller White Mischief. He lives in London with his wife and sons.