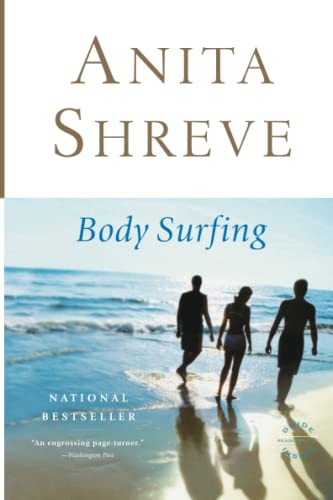 At the age of 29, Sydney has already been once divorced and once widowed. Trying to regain her footing, she has signed on to tutor the teenage daughter of a well-to-do couple as they spend a sultry summer in their oceanfront New Hampshire cottage.

But when the Edwardses' two grown sons arrive at the beach house, Sydney finds herself caught up in a destructive web of old tensions and bitter divisions. As the brothers vie for her affections, the fragile existence Sydney has rebuilt is threatened.

With the subtle wit, lyrical language, and brilliant insight into the human heart that has led her to be called "an author at one with her métier" (Miami Herald), Shreve weaves a novel about marriage, family, and the supreme courage it takes to love.

"Shreve excels at nuance and detail. She skillfully illuminates the tiniest of moments, offering readers a peek at the complex undertones coursing through the characters throughout the story." -Rocky Mountain News

"There is something satisfyingly clean, well functioning, pale, and delicious about an Anita Shreve novel. . . . Shreve's characters, grappling with desire, juggling their shame against their regret, are entirely welcome." -Boston Globe

"Shreve's writing is textured, reflective, and generally flows with ease, to the point where the reader may be surprised at how quickly the pages turn." -Newsday

The beach house in New Hampshire which figured in Anita Shreve's The Pilot's Wife, Fortune's Rocks, and Sea Glass is once again featured in Body Surfing. This time, it is the summer home of the Edwards family, Anna and Mark and daughter Julie. Mrs. Edwards has great hopes for Julie, who is "slow," so she hires Sydney to tutor her, in preparation for her senior year. There are two older brothers, Jeff and Ben, whose arrival changes the household dynamic considerably.

Once again, Shreve revisits the minefield of love and betrayal that she has explored so well in her best novels. Sydney is 29, twice married, once divorced, and once a widow. She is floundering, not sure she wants to go back to school, accepting whatever job comes along and then moving on. She answers the ad for a tutor and finds herself in the Edwards household, where she discovers that Julie has undiscovered artistic talent. Mrs. Edwards dislikes her instantly, is dismissive, and treats her like a servant. Mr. Edwards befriends her, shows her his roses and talks to her about the history of the house, giving the reader a rundown of the role the house has played in prior novels.

Sydney, Jeff, and Ben go body surfing late one night and Sydney is sure that Ben has tried to grope her underwater. She takes immediate umbrage at this and treats him coldly thereafter. Shreve's other work has a steady narrative flow, but this novel is episodic and disjointed. There is the the arrival of Jeff's girlfriend, her departure, an evening when Julie comes home drunk and won't talk about it, and a liaison between Sydney and Jeff which leads to the complications that eventually define the novel. There is a twist at the end, involving the brothers, that is divisive, destructive and rather hard to believe.

While this is not Shreve's best effort, because the characters are not well-defined, it is worth reading her take on what happens to people when they compete for love. --Valerie Ryan

Anita Shreve is the critically acclaimed author of twelve books, including The Pilot's Wife, which was a selection of Oprah's Book Club, and The Weight of Water, which was a finalist for England's Orange prize. She lives in Massachusetts.