Items related to The Return of Little Big Man

The Return of Little Big Man 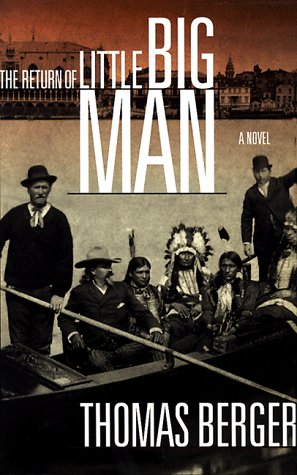 A much anticipated sequel to Little Big Man continues the story of Jack Crabb--the only white survivor of Custer's Last Stand--as he accompanies Buffalo Bill Cody to Europe with his Wild West Show, where he hobnobs with Queen Victoria and reveals the truth behind the murder of Sitting Bull. 50,000 first printing.

Jack Crabb, supposedly the only white man to survive Custer's Last Stand, first disclosed the brimful and dubious chronicle of his life in Thomas Berger's 1964 charmer, Little Big Man. There the 111-year-old, a shade of history who strutted unnoticed through the mythic West, recounted his acquaintances with notables such as George Custer and Wild Bill Hickok, as well as his shuttling between the worlds of whites and Indians. In The Return of Little Big Man, ostensibly a long-lost addendum to these memoirs, we get more of the tale--or more hot air, perhaps. "Just listen to what I tell you, and then check it against the facts if you can," our hero invites.

Return has much in common with its predecessor. Once again, Crabb seems to have known everyone and been nearly everywhere, and his many associates--both notorious and anonymous--reappear as if by miracle. Wyatt Earp, Doc Holliday, and Annie Oakley all check in; while Crabb himself wanders the globe as Buffalo Bill Cody's right-hand man, witnesses both Hickok's and Sitting Bull's murders, and crouches behind a wagon during the O.K. Corral shootout. Berger's Twain-esque ruminations lend an air of purposefulness to Crabb's meanderings, a sense that separation is merely provisional, that existence only appears haphazard.

Crabb, however, seems more than occasionally dispirited--friends pass, younger men ascend. Midway through, though, the book gets its real charge, as Crabb confronts a fading world and a future both bright and bewildering. Sustained by an enormous heart, an affinity for exaggeration, and a conscience both weary and sentimental, he acknowledges the best--and worst--in everyone he meets. It's a story you'd like to believe. --Ben Guterson

Thomas Berger, whom the London Times Literary Supplement has called "one of the century's most important writers," is the author of more than twenty novels, a number of which have been made into movies, including LITTLE BIG MAN. He lives in the Hudson Valley of New York.

1. The Return of Little Big Man

2. The Return of Little Big Man

3. The Return of Little Big Man

4. The Return of Little Big Man

5. The Return of Little Big Man

6. THE RETURN OF LITTLE BIG MAN

7. The Return of Little Big Man