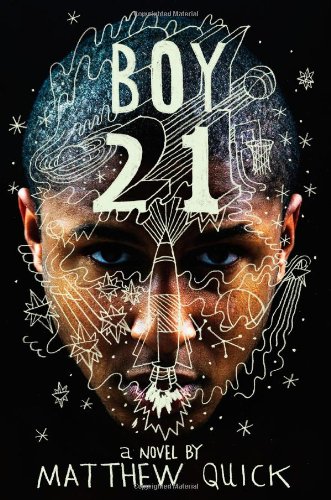 You can lose yourself in repetition--quiet your thoughts; I learned the value of this at a very young age.

Basketball has always been an escape for Finley. He lives in broken-down Bellmont, a town ruled by the Irish mob, drugs, violence, and racially charged rivalries. At home, his dad works nights, and Finley is left to take care of his disabled grandfather alone. He's always dreamed of getting out someday, but until he can, putting on that number 21 jersey makes everything seem okay.
Russ has just moved to the neighborhood, and the life of this teen basketball phenom has been turned upside down by tragedy. Cut off from everyone he knows, he won't pick up a basketball, but answers only to the name Boy21--taken from his former jersey number.
As their final year of high school brings these two boys together, a unique friendship may turn out to be the answer they both need.

Matthew Quick (aka Q) is the author of The Silver Linings Playbook (Sarah Crichton Books / Farrar, Straus & Giroux) and three young adult novels, Sorta Like a Rock Star, Boy21, and Forgive Me, Leonard Peacock (Little, Brown & Co.). His work has received many honors--including a PEN/Hemingway Award Honorable Mention--been translated into many languages, and called "beautiful...first-rate" by The New York Times Book Review. The Weinstein Company and David O. Russell have adapted The Silver Linings Playbook into a film starring Robert De Niro, Bradley Cooper, and Jennifer Lawrence. Matthew lives in Massachusetts with his wife, novelist Alicia Bessette. His website is www.matthewquickwriter.com.

"...satisfying but never simple... A story that, like [its narrator] Finley, expresses a lot in relatively few words." Kirkus *STARRED REVIEW*

"...[Quick's] emotionally raw tale retains a delicate sense of hope and optimism, making it a real gut punch of a read." Publishers Weekly

"...heartbreaking, but the hopeful ending pays off. An unusual and touching story." Booklist

"Quick is a master of capturing the rawness of adolescence and the bleakness that comes from being trapped in the wrong world, whether it's Finley's bad neighborhood or, in the case of Boy21, Earth." The Boston Globe