Items related to The Hummingbird's Daughter 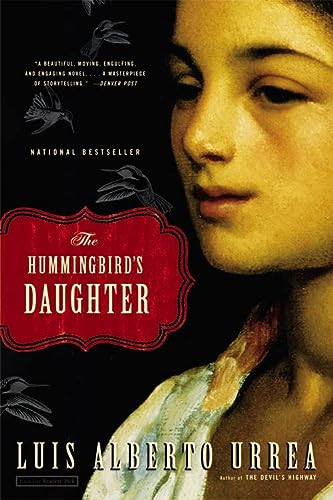 Discover an epic historical novel of a young saint escaping death from Pulitzer Prize finalist Luis Alberto Urrea, author of The House of Broken Angels.
The prizewinning writer Luis Alberto Urrea's long-awaited novel is an epic mystical drama of a young woman's sudden sainthood in late 19th-century Mexico. It is 1889, and civil war is brewing in Mexico. A 16-year-old girl, Teresita, the illegitimate but beloved daughter of the wealthy and powerful rancher Don Tomas Urrea, wakes from the strangest dream-a dream that she has died. Only it was not a dream. This passionate and rebellious young woman has arisen from death with a power to heal-but it will take all her faith to endure the trials that await her and her family now that she has become the Saint of Cabora. The Hummingbird's Daughter is a vast, hugely satisfying novel of love and loss, joy and pain.

Starred Review. "Her powers were growing now, like her body. No one knew where the strange things came from. Some said they sprang up in her after the desert sojourn with Huila. Some said they came from somewhere else, some deep inner landscape no one could touch. That they had been there all along." Teresita, the real-life "Saint of Cabora," was born in 1873 to a 14-year-old Indian girl impregnated by a prosperous rancher near the Mexico-Arizona border. Raised in dire poverty by an abusive aunt, the little girl still learned music and horsemanship and even to read: she was a "chosen child," showing such remarkable healing powers that the ranch's medicine woman took her as an apprentice, and the rancher, Don Tomás Urrea, took her—barefoot and dirty—into his own household. At 16, Teresita was raped, lapsed into a coma and apparently died. At her wake, though, she sat up in her coffin and declared that it was not for her. Pilgrims came to her by the thousands, even as the Catholic Church denounced her as a heretic; she was also accused of fomenting an Indian uprising against Mexico and, at 19, sentenced to be shot. From this already tumultuous tale of his great-aunt Teresa, American Book Award–winner Urrea (The Devil's Highway) fashions an astonishing novel set against the guerrilla violence of post–Civil War southwestern border disputes and incipient revolution. His brilliant prose is saturated with the cadences and insights of Latin-American magical realism and tempered by his exacting reporter's eye and extensive historical investigation. The book is wildly romantic, sweeping in its effect, employing the techniques of Catholic hagiography, Western fairy tale, Indian legend and everyday family folklore against the gritty historical realities of war, poverty, prejudice, lawlessness, torture and genocide. Urrea effortlessly links Teresita's supernatural calling to the turmoil of the times, concealing substantial intellectual content behind effervescent storytelling and considerable humor.
Copyright © Reed Business Information, a division of Reed Elsevier Inc. All rights reserved.

The Hummingbird's Daughter (Paperback or Softback)