Items related to Where'd You Go, Bernadette: A Novel

Where'd You Go, Bernadette: A Novel 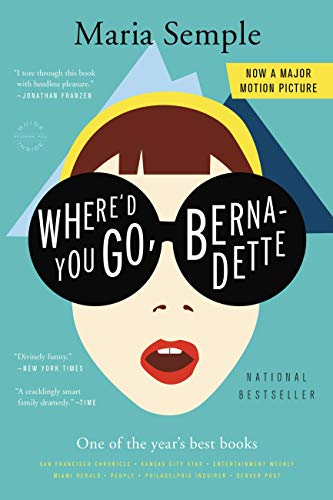 A misanthropic matriarch leaves her eccentric family in crisis when she mysteriously disappears in this whip-smart and "divinely funny" novel that inspired the movie starring Cate Blanchett (New York Times).
Bernadette Fox is notorious. To her Microsoft-guru husband, she's a fearlessly opinionated partner; to fellow private-school mothers in Seattle, she's a disgrace; to design mavens, she's a revolutionary architect; and to 15-year-old Bee, she is her best friend and, simply, Mom.

Then Bernadette vanishes. It all began when Bee aced her report card and claimed her promised reward: a family trip to Antarctica. But Bernadette's intensifying allergy to Seattle--and people in general--has made her so agoraphobic that a virtual assistant in India now runs her most basic errands. A trip to the end of the earth is problematic.

To find her mother, Bee compiles email messages, official documents, and secret correspondence--creating a compulsively readable and surprisingly touching novel about misplaced genius and a mother and daughter's role in an absurd world.

Maria Semple's first novel, This One is Mine, was set in Los Angeles, where she also wrote for television shows including Arrested Development, Mad About You, and Ellen. She escaped from Los Angeles and lives with her family in Seattle, where her second novel takes place.

"This divinely funny, many-faceted novel...leaves convention behind. Instead, it plays to Ms. Semple's strengths as someone who can practice ventriloquism in many voices, skip over the mundane and utterly refute the notion that mixed-media fiction is bloggy, slack or lazy.... The tightly constructed WHERE'D YOU GO, BERNADETTE is written in many formats-e-mails, letters, F.B.I. documents, correspondence with a psychiatrist and even an emergency-room bill for a run-in between Bernadette and Audrey. Yet these pieces are strung together so wittily that Ms. Semple's storytelling is always front and center, in sharp focus. You could stop and pay attention to how apt each new format is, how rarely she repeats herself and how imaginatively she unveils every bit of information. But you would have to stop laughing first."―Janet Maslin, The New York Times

You don't have to know Seattle to get Maria Semple's broadly satirical novel.... Underlying the nontraditional narrative are insights into the cost of thwarted creativity and the power of mother-daughter bonds, although a reader may be having too much fun to notice."―O, The Oprah Magazine

"Delightfully droll.... Semple...cuts a wry slice of a life-one that's populated by private school helicopter parents, obsessively eco-conscious neighbors, and green-juice swilling, TED-talking husbands-and one that's sharp enough to make us feel slightly relieved about not having to live anywhere quite so bucolic."―Megan O'Grady, Vogue

"The characters in Where'd You Go, Bernadette may be in real emotional pain, but Semple has the wit and perspective and imagination to make their story hilarious. I tore through this book with heedless pleasure."
―Jonathan Franzen, author of Freedom

"There's a lot to like in Semple's charming novel, including the vivacious humor and the lesson that when creative forces like Bernadette stop creating, they become 'a menace to society.' Even more appealing is the mutually adoring mother-daughter relationship at its warm heart."―Heller McAlpin, NPR

"In her second novel...Semple pieces together a modern-day comic caper full of heart and ingenuity....a compelling composite of a woman's life-and the way she's viewed by the many people who share it. As expected from a writer who has written episodes of Arrested Development, the nuances of mundane interactions are brilliantly captured, and the overarching mystery deepens with each page, until the thoroughly satisfying dénouement."―Publisher's Weekly (Starred Review)

"Agoraphobia and Antarctica are among the elements in Maria Semple's terrific novel."―Parade

"Warm, dark, sad, funny-and a little bit screwball.... This is an inventive and very funny novel that gets bonus points for transcending form."―Susan Coll, The Washington Post

1. Where'd You Go, Bernadette: A Novel

2. Where'd You Go, Bernadette: A Novel

3. Where'd You Go, Bernadette: A Novel

4. Where'd You Go, Bernadette: A Novel

5. Where'd You Go, Bernadette: A Novel

6. Where'd You Go, Bernadette: A Novel

7. Where'd You Go, Bernadette: A Novel

8. Where'd You Go, Bernadette: A Novel

9. Where'd You Go, Bernadette: A Novel