Items related to Paper Lion: Confessions of a Last-String Quarterback 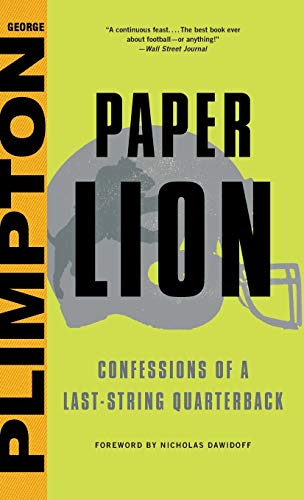 The book that made a legend--and capture's America's sport in detail that's never been matched, now featuring a foreword by Nicholas Dawidoff a and never-before-seen content from the Plimpton Archives.

George Plimpton was perhaps best known for PAPER LION, the book that set the bar for participatory sports journalism. With his characteristic wit, Plimpton recounts his experiences in talking his way into training camp with the Detroit Lions, practicing with the team, and taking snaps behind center. His breezy style captures the pressures and tensions rookies confront, the hijinks that pervade when sixty high-strung guys live together in close quarters, and a host of football rites and rituals.

One of the funniest and most insightful books ever written on football, PAPER LION is a classic look at the gridiron game and a book The Wall Street Journal calls "a continuous feast...The best book ever about football--or anything!"

George Plimpton (1927-2003) was the bestselling author and editor of nearly thirty books, as well as the cofounder, publisher, and editor of the Paris Review. He wrote regularly for such magazines as Sports Illustrated and Esquire, and he appeared numerous times in films and on television.

"A great book that makes football absolutely fascinating to fan and non-fan alike...a tale to gladden the envious heart of every weekend athlete.... Plimpton has endless curiosity, unshakable enthusiasm and nerve, and a deep respect for the world he enters."―New York Times

"The agility and imaginativeness of his prose transforms his account of this daydream into a classic of sports reporting."―The New Yorker

"Possibly the most arresting and delightful narrative in all of sports literature."―Book Week

"A delight--more entertaining, if possible, than I remembered... the reader leaves George Plimpton's wide world of sports with deep reluctance.... His prose is as elegant and seemingly effortless as Ted Williams's swing or an Arnold Palmer iron shot.... His teammates recede--like the old baseball players vanishing into the cornfield in Field of Dreams, taking their magical world with them but living on in fond memory."―Edward Kosner, Wall Street Journal

"Sports memoirs, like humor collections, rarely outlive their authors, but Plimpton's books have aged gracefully and even matured. Today they have the additional (and unintended) appeal of vivid history, bearing witness to a mythical era."―Nathaniel Rich, New York Review of Books

Book Description Condition: New. This is a brand new book! Fast Shipping - Safe and Secure Mailer - Our goal is to deliver a better item than what you are hoping for! If not we will make it right!. Seller Inventory # 1XGDJP002OAY_ns