Items related to Indestructible: One Man's Rescue Mission That Changed...

Indestructible: One Man's Rescue Mission That Changed the Course of WWII 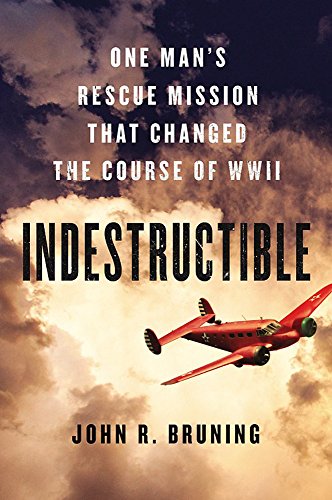 In this remarkable WWII story by New York Times bestselling author John R. Bruning, a renegade American pilot fights against all odds to rescue his family--imprisoned by the Japanese--and revolutionizes modern warfare along the way.

From the knife fights and smuggling runs of his youth to his fiery days as a pioneering naval aviator, Paul Irving "Pappy" Gunn played by his own set of rules and always survived on his wits and fists. But when he fell for a conservative Southern belle, her love transformed him from a wild and reckless airman to a cunning entrepreneur whose homespun engineering brilliance helped launch one of the first airlines in Asia.

Pappy was drafted into MacArthur's air force when war came to the Philippines; and while he carried out a top-secret mission to Australia, the Japanese seized his family. Separated from his beloved wife, Polly, and their four children, Pappy reverted to his lawless ways. He carried out rescue missions with an almost suicidal desperation. Even after he was shot down twice and forced to withdraw to Australia, he waged a one-man war against his many enemies--including the American high command and the Japanese--and fought to return to the Philippines to find his family.

Without adequate planes, supplies, or tactics, the U.S. Army Air Force suffered crushing defeats by the Japanese in the Pacific. Over the course of his three-year quest to find his family, Pappy became the renegade who changed all that. With a brace of pistols and small band of loyal fol,lowers, he robbed supply dumps, stole aircraft, invented new weapons, and modified bombers to hit harder, fly farther, and deliver more destruction than anything yet seen in the air. When Pappy's modified planes were finally unleashed during the Battle of the Bismarck Sea, the United States scored one of the most decisive victories of World War II.

Taking readers from the blistering skies of the Pacific to the jungles of New Guinea and the Philippines to one of the the war's most notorious prison camps, Indestructible traces one man's bare-knuckle journey to free the people he loved and the aerial revolution he sparked that continues to resonate across America's modern battlefields.

John R. Bruning is the author or collaborating writer of a number of nonfiction books, including the critically acclaimed New York Times bestseller Outlaw Platoon (Morrow) written with Sean Parnell, Shadow of the Sword with Jeremiah Workman (Ballantine), How to Break a Terrorist with Matthew Alexander (Free Press), House to House with David Bellavia (Free Press), The Devil's Sandbox (Zenith), and Ghost: Confessions of a Counterterrorism Agent with Fred Burton (Random House, a New York Times expanded list bestseller). Bruning is well-traveled as an embedded combat correspondent. For his reporting in Afghanistan, the Department of Defense presented him with a prestigious 2010 Thomas Jefferson Award. For his work with the Oregon National Guard, he was inducted into the 162nd Infantry Regiment in September 2011 as an honorary member. John lives in Independence, Oregon, and has two children.

"Paul Irvin Gunn's time in World War II is the stuff of legends - and its fast-paced, page-turning telling in Bruning's book does the man's Herculean feats justice.... The book reads more like an overly-detailed movie script than a work of historical non-fiction, complete with a heart-wrenching love story and heroic conclusion....Indestructible offers a glimpse of the Pacific theater like you've never before seen."
―Men's Journal


"This is a beautifully told story of a family separated by war, and of an extraordinary father, driven to avenge his family, who by sheer force of character changed the nature of warfare. A superbly told tale of love, honor, courage and devotion."
―Alex Kershaw, author of Avenue of Spies


"This thriller-like narrative not only reveals the disturbing plight of courageous American families held in Japanese internment camps, but also delivers a gripping portrait of a uniquely American hero, Pappy Gunn, who fought two wars--one for his country and one to rescue his wife and children."
―James Bradley, bestselling author of Flags of Our Fathers, Flyboys, The Imperial Cruise, and The China Mirage

"Here is a true story with something for everyone. Love, war, treachery, adventure, and above all an intimate portrait of the made-for-Hollywood life of a man who broke all the rules and remade them to his liking. Finally, we have a book that does justice to the legend of Colonel Paul 'Pappy' Gunn, a giant among heroes of World War II. John Bruning shows us a big-hearted man determined to save his family--and a brilliant scientist-pilot who was determined to win the war along the way."
―Adam Makos, author of A Higher Call and Devotion


"From the opening pages, Bruning grabs you by the collar and pulls you into the story, not letting go as he masterfully guides you through a part of World War II that is largely unknown. This is the work of a skilled wordsmith who knows how to tell a story."
―Gregory A. Freeman, author of The Forgotten 500

"Set against the sprawling and violent Pacific War, Indestructible is the incredible story of one man's courage, tenacity and dogged fight to rescue his family caught behind enemy lines. The book left me with chills."
―James M. Scott, author of Target Tokyo: Jimmy Doolittle and the Raid that Avenged Pearl Harbor


"Bruning's gripping account of 'Pappy' Gunn's mission to save his family might seem to some like over-the-top fiction, but Gunn's rage really did drive changes to tactics and modifications to aircraft that changed the course of the Pacific War... every lover of bigger-than-life-but-still-true tales of wartime heroism will want to read this vividly written history."
―Booklist, starred review

"This is a compelling story with strong characters and a wealth of fascinating incidents, set against some of the fiercest action of the war."
―Kirkus Reviews

"[A] story of honor, faith, endurance and love. Indestructible is a worthwhile read for anyone interested not only in the history of the war in the Pacific but also of determination in the face of daunting odds."―Yakima Herald

8. Indestructible: One Man's Rescue Mission That Changed the Course of WWII

9. Indestructible: One Man's Rescue Mission That Changed the Course of WWII (Hardback)

Book Description Little, Brown & Company, United States, 2016. Hardback. Condition: New. Language: English. Brand new Book. When hostilities erupted in December 1941, Pappy Gunn was living in Manila with his family, working as a manager for Philippine Airlines. Unfortunately, when the Japanese finally marched on Manila the Air Force ordered him to fly key Army Air Force personnel out of the country. The order left him with the most important decision of his life, for he was already preparing to fly his family to safety. Whom would he take first? Unbeknownst to Pappy, MacArthur's staff deceived him by telling him he had time to do both. While he took off from Manila with his plane full of VIP's, the Japanese captured his wife and four children. Throwing them into the infamous Santo Tomas Internment camp, Pappy's family suffered through abuse, privation, disease and starvation. Betrayed by his own high command, and driven by guilt, fury and devotion to his family, Pappy Gunn spent the next three years trying to rescue his loved ones. His exploits became legend: He flew four times the number of combat missions of men half his age, extracting spies, sinking enemy ships, and building airfields under the nose of the Japanese. He revolutionized the art of air warfare in the process by devising his own weaponry, missions, and combat strategies. By the end of the war, Pappy's ingenuity and flair for innovation helped transform MacArthur's air force into the scourge of the Pacific. Seller Inventory # BZE9780316339407

10. Indestructible: One Man's Rescue Mission That Changed the Course of WWII (Hardcover)

Book Description 2016. Hardcover. Condition: New. Hardcover. When hostilities erupted in December 1941, Pappy Gunn was living in Manila with his family, working as a manager for Philippine Airlines. Unfortunately, when the Japanese finally marched o.Shipping may be from multiple locations in the US or from the UK, depending on stock availability. 544 pages. 0.820. Seller Inventory # 9780316339407