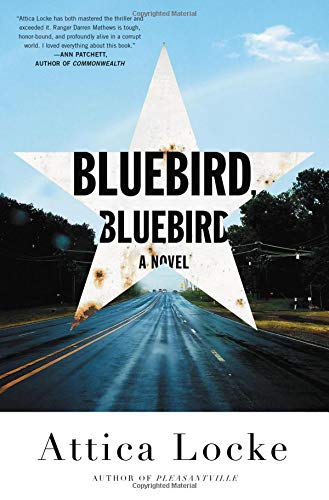 Winner of the 2018 Edgar Award for Best Novel
One of CrimeReads's Best Novels of the Decade
A "heartbreakingly resonant" (USA Today) thriller about the explosive intersection of love, race, and justice from the author of Heaven, My Home

When it comes to law and order, East Texas plays by its own rules--a fact that Darren Mathews, a black Texas Ranger, knows all too well. Deeply ambivalent about growing up black in the lone star state, he was the first in his family to get as far away from Texas as he could. Until duty called him home.

When his allegiance to his roots puts his job in jeopardy, he travels up Highway 59 to the small town of Lark, where two murders--a black lawyer from Chicago and a local white woman--have stirred up a hornet's nest of resentment. Darren must solve the crimes--and save himself in the process--before Lark's long-simmering racial fault lines erupt. From a writer and producer of the Emmy winning Fox TV show Empire, Bluebird, Bluebird is a rural noir suffused with the unique music, color, and nuance of East Texas.

"In Bluebird, Bluebird Attica Locke has both mastered the thriller and exceeded it." --Ann Patchett

Attica Locke is the author of Pleasantville, which won the 2016 Harper Lee Prize for Legal Fiction and was long-listed for the Baileys Women's Prize for Fiction; Black Water Rising, which was nominated for an Edgar Award; and The Cutting Season, a national bestseller and winner of the Ernest Gaines Award for Literary Excellence. She was a writer and producer on the Fox drama Empire. A native of Houston, Texas, Attica lives in Los Angeles, California, with her husband and daughter.

"An emotionally dense and intricately detailed thriller, roiling with conflicting emotions steeped in this nation's troubled past and present. . . . A rich sense of place and relentless feeling of dread permeate Attica Locke's heartbreakingly resonant new novel about race and justice in America. . . . Bluebird, Bluebird is no simple morality tale. Far from it. It rises above "left and right" and "black and white" and follows the threads that inevitably bind us together, even as we rip them apart."―James Endrst, USA Today

"Gripping, suspenseful and gut-wrenching . . . I've never bought the notion of the Great American Novel. I think when literary historians look back, they'll realize this time had many, but if Attica Locke's Bluebird Bluebird isn't on the list, I'm coming back to haunt them. . . . This is a layered portrait of a black man confronting his own racial ambivalence and ambition told with a pointed and poignant bluesy lyricism. . . . Locke's novel is America 'telling on itself.' Listen up."―Carole Barrowman, Milwaukee Journal Sentinel

"In Bluebird, Bluebird Attica Locke had both mastered the thriller and exceeded it. Ranger Darren Mathews is tough, honor-bound, and profoundly alive in corrupt world. I loved everything about this book."―Ann Patchett

"Few contemporary writers have portrayed black Southern life with as much wit and heart-pounding drama as Attica Locke. . . . A dazzling work of rural noir that throws into question whether justice can be equally served on both sides of the race line."―Amy Brady, Los Angeles Times

"Locke pens a poignant love letter to the lazy red-dirt roads and Piney Woods that serve as a backdrop to a noir thriller as murky as the bayous and bloodlines that thread through the region. . . . Locke shows off her chops as a superb storyteller. . . . She is adept at crafting characters who don't easily fit the archetypes of good and evil, but exist in the thick grayness of humanness, the knotty demands of loyalties and the baseness of survival. Locke holds up the mirror of the racial debate in America and shows us how the light bends and fractures what is right, wrong and what simply is the way it is--but perhaps not as it should be."―Jaundréa Clay, Houston Chronicle

"Powerful . . . Locke is a master of plot who's honed her craft. . . . The deepest pleasures to be found in Bluebird, Bluebird, though, are in her renderings of those who've loved and lost but still want to believe in the world's benevolence."―Leigh Haber, O., The Oprah Magazine

"I've never bought the notion of the Great American Novel. I think when literary historians look back, they'll realize this time had many, but if Attica Locke's"Bluebird Bluebird" (Mulholland) isn't on the list, I'm coming back to haunt them."―Carole E. Barrowman, The Milwaukee Journal Sentinel