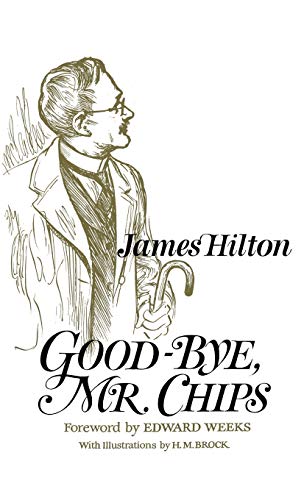 Full of enthusiasm, young English schoolmaster Mr. Chipping came to teach at Brookfield in 1870. It was a time when dignity and a generosity of spirit still existed, and the dedicated new schoolmaster expressed these beliefs to his rowdy students. Nicknamed Mr. Chips, this gentle and caring man helped shape the lives of generation after generation of boys. He became a legend at Brookfield, as enduring as the institution itself. And sad but grateful faces told the story when the time came for the students at Brookfield to bid their final goodbye to Mr. Chips.

There is not another book, with the possible exception of Dickens's A Christmas Carol, that has quite the same hold on readers' affections. James Hilton wrote Goodbye, Mr. Chips in loving memory of his schoolmaster father and in tribute to his profession. Over the years it has won an enduring place in world literature and made untold millions of people smile--with a catch in the throat.

James Hilton (1900-1954) was a bestselling English novelist and Academy Award-winning screenwriter. After attending Cambridge University, Hilton worked as a journalist until the success of his novels Lost Horizon (1933) and Goodbye, Mr. Chips (1934) launched his career as a celebrated author. Hilton's writing is known for its depiction of English life between the two world wars, its celebration of English character, and its honest portrayal of life in the early twentieth century.