Items related to An Orchestra of Minorities

Obioma, Chigozie An Orchestra of Minorities 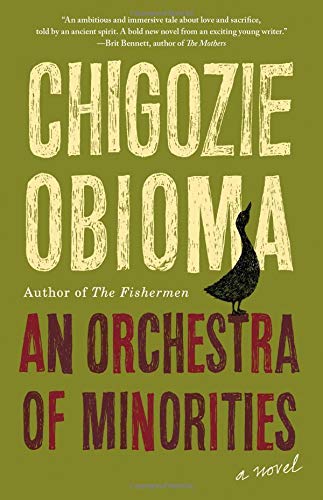 The "superb and tragic" Booker Prize finalist about a Nigerian poultry farmer who sacrifices everything to win the woman he loves, by the author of The Fishermen (Boston Globe)
Set on the outskirts of Umuahia, Nigeria and narrated by a chi, or guardian spirit, AN ORCHESTRA OF MINORITIES tells the story of Chinonso, a young poultry farmer whose soul is ignited when he sees a woman attempting to jump from a highway bridge. Horrified by her recklessness, Chinonso joins her on the roadside and hurls two of his prized chickens into the water below to express the severity of such a fall. The woman, Ndali, is stopped her in her tracks.

Bonded by this night on the bridge, Chinonso and Ndali fall in love. But Ndali is from a wealthy family and struggles to imagine a future near a chicken coop. When her family objects to the union because he is uneducated, Chinonso sells most of his possessions to attend a college in Cyprus. But when he arrives he discovers there is no place at the school for him, and that he has been utterly duped by the young Nigerian who has made the arrangements.. Penniless, homeless, and furious at a world which continues to relegate him to the sidelines, Chinonso gets further away from his dream, from Ndali and the farm he called home.

Spanning continents, traversing the earth and cosmic spaces, and told by a narrator who has lived for hundreds of years, the novel is a contemporary twist of Homer's Odyssey. Written in the mythic style of the Igbo literary tradition, Chigozie Obioma weaves a heart-wrenching epic about destiny and determination.

An Amazon Best Book of January 2019: In 2015, Nigerian writer Chigozie Obioma’s debut, The Fisherman, was short-listed for the Man Booker Prize and announced the arrival of a talented new author. There is no drop-off in his sophomore effort, An Orchestra of Minorities, about a young farmer who, having fallen in love with a woman from a wealthy family, risks everything to prove his worth. As he did in his first novel, Obioma merges African and western storytelling traditions—in this case, the tale is narrated by the young man’s chi, or guardian spirit, and the story is patterned after The Odyssey—to create a dramatic, character-based novel. Readers will become immersed in his main character Chinonso’s journey, but it will leave them thinking about bigger themes as well—like the balance between self-determination and fate (or luck); and about the capacity for some to take advantage of others, and how that sort of mistreatment gets paid forward. --Chris Schluep, Amazon Book Review

Chigozie Obioma was born in Akure, Nigeria. His debut novel, The Fishermen, is winner of the inaugural FT/Oppenheimer Award for Fiction, the NAACP Image Awards for Debut Literary Work, and the Art Seidenbaum Award for First Fiction (Los Angeles Times Book Prizes); and was a finalist for the Man Booker Prize 2015, as well as for several other prizes in the US and UK. Obioma was named one of Foreign Policy's 100 Leading Global Thinkers of 2015. His work has been translated into more than 25 languages and adapted into stage. He is an assistant professor of Literature and Creative Writing at the University of Nebraska-Lincoln. His second novel, An Orchestra of Minorities, was published in Spring 2019 by Little, Brown and Co.

An Orchestra of Minorities [Signed, dated, and placed]