The Last Lion: Winston Spencer Churchill: Defender of the Realm, 1940-1965 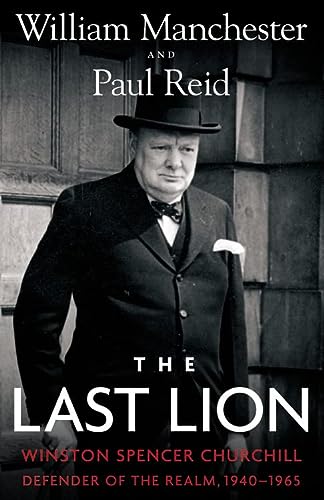 The long-awaited final volume of William Manchester's legendary biography of Winston Churchill.
Spanning the years of 1940-1965, THE LAST LION picks up shortly after Winston Churchill became Prime Minister-when his tiny island nation stood alone against the overwhelming might of Nazi Germany. The Churchill conjured up by William Manchester and Paul Reid is a man of indomitable courage, lightning fast intellect, and an irresistible will to action. THE LAST LION brilliantly recounts how Churchill organized his nation's military response and defense; compelled FDR into supporting America's beleaguered cousins, and personified the "never surrender" ethos that helped the Allies win the war, while at the same time adapting himself and his country to the inevitable shift of world power from the British Empire to the United States.

More than twenty years in the making, THE LAST LION presents a revelatory and unparalleled portrait of this brilliant, flawed, and dynamic leader. This is popular history at its most stirring.

William Manchester was a hugely successful popular historian and biographer whose books include The Last Lion, Volumes 1 and 2, Goodbye Darkness, A World Lit Only by Fire, The Glory and the Dream, The Arms of Krupp, American Caesar, The Death of the President, and assorted works of journalism.

Paul Reid is an award-winning journalist. In late 2003 his friend, William Manchester, in failing health, asked Paul to complete The Last Lion: Defender of the Realm. He lives in North Carolina.

"[Reid's] palpable enthusiasm at thinking about Churchill demonstrates once again...the grip this iconic figure can still exercise on the imagination....Reid...use[s] his journalist's eye to pick up on small details or points of color that illustrate a wider truth."―Richard Aldous, New York Times Book Review

"Masterful.... It was worth the wait.... The collaboration completes the Churchill portrait in a seamless manner, combining the detailed research, sharp analysis and sparkling prose that readers of the first two volumes have come to expect."―Associated Press

"This book is superb. It has tremendous pace, rich detail and immense drama."―Washington Post

"Reid has produced a third Last Lion...that is both magisterial and humane. Cue the trumpets."―Vanity Fair

"It's a must-read finale for those who loved Manchester's first two books."―USA Today

"The final volume of Manchester's life of Winston Churchill is majestic and inspiring."―People

"Masterful... [and] breathtaking....Reid...finished the race with agility, grace, and skill....This is a book that is brilliant and beautiful, evocative and enervating."―Boston Globe

"Reid has produced a volume about the climax of Churchill's career which ably captures the fullness of the story.... Reid's narrative...is straightforward, well written, and compelling."―Steven F. Hayward, The Weekly Standard

"The long-delayed majestic account of Winston Churchill's last 25 years is worth the wait....Manchester (and Reid) matches the outstanding quality of biographers such as Robert Caro and Edmund Morris, joining this elite bank of writers who devote their lives to one subject."―Publishers Weekly