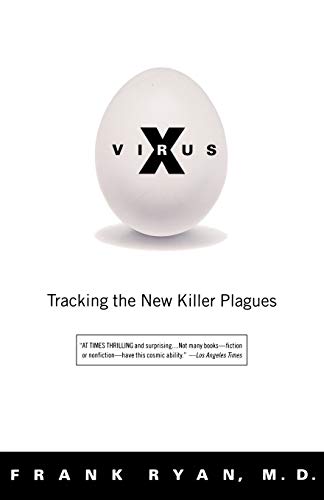 AIDS, Ebola, "mad cow disease," "flesh-eating" viruses...Today's newspapers are full of articles about new plagues & viruses. Where do these new viruses come from? Why do new plagues arise? Could there be - will there be - a lethal & incurable Virus X that spreads as easily as the common cold? The author, a renowned authority on diseases, presents a radical theory about the origin of deadly microbes in a book that takes us into the "hot zones" of today's most dangerous viral outbreaks, then into the research labs & hospitals where doctors & scientists are risking their lives trying to control them.

Who needs Stephen King when there are such real-life horrors as those described in Dr. Frank Ryan's new book, Virus X to keep sleep at bay? Such exotic killers as Ebola and Necrotizing Fasciitis rub elbows with more familiar, if no less potentially lethal, diseases like tuberculosis as Dr. Ryan constructs a well-researched and well-written study that reads more like a thriller than a science book. The heroes are the doctors, nurses, and patients on the frontlines of plague as well as the researchers at laboratories such as the Centers for Disease Control in Atlanta, Georgia; the enemies are the myriad new viruses and virulent new strains of old viruses that are emerging in ever greater numbers as this century wears to a close.

Dr. Ryan's answer for why so many plagues are ravaging the world these days is simple but chilling: a huge explosion in population (6 billion people alive today versus 1.5 billion a century ago) and the resulting destruction of habitats has brought human beings into contact with aggressive viruses that once lived beyond our reach; our global transportation systems spread them. Virus X is not the first book to raise these issues, but it's a comprehensive one, making for gripping, frightening reading.

From the author of The Forgotten Plague (1993), which sounded an alarm about the resurgence of tuberculosis, comes another dire warning, this time about the threat of new plagues from emerging viruses. Ryan, a member of both the Royal College of Physicians and the New York Academy of Medicine, painstakingly chronicles numerous outbreaks, including those of hantavirus in the American Southwest in 1993, Ebola virus in Sudan and Zaire in 1976 and in Reston, Va., in 1989, and, of course, HIV. In addition to recounting the grim details, he examines the circumstances under which these new, lethal viruses have emerged and proposes an intriguing explanation of what is going on. Ryan's theory is that viruses have co-evolved with their feral hosts, with which they have developed a symbiotic relationship. When a rival species, such as humankind, intrudes on the host's environment, the virus attacks the invader. Vast numbers of viruses exist in the rainforests of the world, as well as in the grasslands and the oceans, and as deforestation, agricultural intrusion, and coastal pollution continue, humans can expect to encounter them. As yet, no new virus has been both lethal and highly infectious; however, if one were to emerge that combined these two characteristics--as deadly, say, as HIV and as contagious as the common cold--the result could be a pandemic of catastrophic proportions. He urges increased international cooperation to reduce abuse of the environment, and he calls on governments and the medical profession to get ready now for the very real danger posed by a new viral pandemic. Detailed, Berton Rouech‚style accounts of medical detection in support of a powerful doomsday warning. (8 pages b&w photos, not seen) (Radio satellite tour) -- Copyright ©1996, Kirkus Associates, LP. All rights reserved.

Book Description BACK BAY BOOKS, United States, 2011. Paperback. Condition: New. Language: English. Brand new Book. A renowned authority on diseases, presents a radical theory about the origin of deadly microbes in a book that takes us into the "hot zones" of today's most dangerous viral outbreaks, then into the research labs and hospitals where doctors and scientists are risking their lives trying to control them. AIDS, Ebola, "mad cow disease," "flesh-eating" viruses.Today's newspapers are full of articles about new plagues and viruses. Where do these new viruses come from? Why do new plagues arise? Could there be -- will there be -- a lethal and incurable Virus X that spreads as easily as the common cold?. Seller Inventory # APC9780316763066

Book Description Paperback. Condition: New. 430+ pages. Only some slight shelf wear, otherwise New. Quality Books. Because We Care - Shipped from Canada. Usually ships within 1-2 business days. If you buy this book from us, we will donate a book to a local school. We donate 10,000+ books to local schools every year. Seller Inventory # R09068x