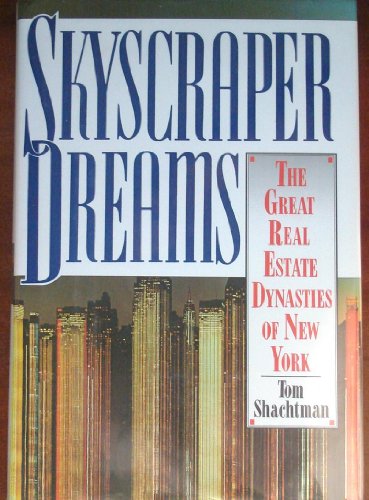 Tom Shachtman is an author, documentary filmmaker, and teacher. He has written 25 books for adults and children, as well as award-winning documentaries for all the major television networks. His adult histories, which cover points of change in the twentieth century, have been regularly described as ?fascinating,? ?filled with illuminating detail,? ?highly readable,? and as written ?with passion and clarity.?

A comprehensive history of the families who risked fortunes and occasionally lost them while working their designs on N.Y.C.'s skyline--by the author of The Phony War (1982) and The Day America Crashed (1979). From the Astors in the late 19th century to the Trumps of yesterday, Manhattan real estate has been a quintessential family business. The reasons become clear as Shachtman traces the process by which generations of Rhinelanders, Astors, and Goelets cultivated their modest, pre-elevator, lower-Manhattan rental properties while gradually transforming them into grand hotels, palatial mansions, and the base of America's most sophisticated social elite. The wave of Russian-Jewish immigrants who followed brought their own ideas of family intact from their homeland; to ensure the survival of their own they banded together to purchase apartment buildings in their ghettos on the Lower East Side, experiment with larger projects in the outer boroughs, and eventually--sometimes a generation or so later--tackle the well- entrenched establishment on the great island itself. Then as now, the business of buying low, building tall, and selling high was a cutthroat one in which only blood relatives could truly be trusted. Developers without heirs were likely to see their influence on the skyline die quickly, while even families virtually destroyed by New York's constant economic fluctuations were able to recover in subsequent, possibly wiser, generations. The downside of rampant overdevelopment is given short shrift in this mild-mannered account, however. Despite occasional eccentricities (old Astor's wet nurse, Trump's manipulation of the media), Shachtman evokes a hard-working, civic-minded, rather stodgy group, whose generally humble demeanor contrasts sharply with the concrete evidence of their ambitions. Overly respectful, perhaps, but captivating nevertheless. -- Copyright ©1991, Kirkus Associates, LP. All rights reserved.