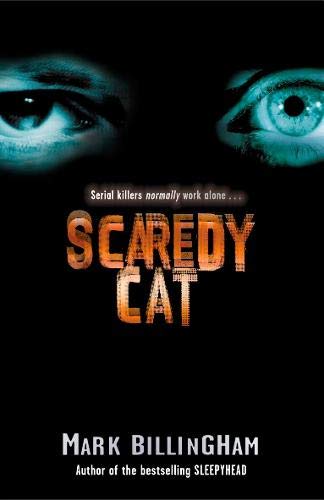 In this novel, DI Tom Thorne finds himself hunting two very different killers. One is ruthless and in control, while his partner in crime is submissive, compliant and terrified.

Mark Billingham is a stand-up comedian, appearing regularly at the Comedy Store. He has also written drama for children's television, including Knight School which won the Royal Television Society Award for best children's drama.

Billingham's second thriller (after Sleepyhead) featuring London Det. Insp. Tom Thorne offers a twist on the serial killer subgenre. Brooding, melancholy Thorne heads a team of detectives who are alerted to the death of a young mother brutally strangled as her three-year-old son looks on. The body of a second murder victim, strangled in the same manner, turns up the same day, and Thorn and his team surmise they have a serial killer on their hands. The first half of the book deals with Thorne's discovery that there are really two killers at work and introduces the childhood backstory of the murderers. The second half picks up speed as the actual hunt commences. Billingham is adept at creating believable characters with ordinary and not-so-ordinary personal problems, then weaving them into the plot in surprising ways. At times, though, he pushes too hard to make Thorne's colleagues quirky: "Thorne stared at the figure in black fleece, with shaved head and a startling collection of facial piercings. Phil Hendricks was not everyone's idea of a pathologist, but he was the best Thorne had ever worked with." Thorne's gloomy internal musings on death and guilt tend to slow things down, but Billingham's handling of the plot is deft, fair and scattered with enough red herrings to open a fish and chips shop. When the mastermind behind both sets of killings is revealed in a dramatic denouement, readers will give the author his due and settle back to wait for the next installment of this dependable series.
Copyright 2003 Reed Business Information, Inc.

Book Description Little, Brown, 2002. Hardcover. Condition: New. Dust Jacket Condition: New. 1st Edition. SIGNED by MARK BILLINGHAM ON THE TITLE PAGE - UK FIRST EDITION/FIRST PRINTING - THE BOOK IS NEW & UNREAD - SPINE HAS NOT BEEN CRACKED - BUT HAS TONING TO PAGES COMMON TO UK BOOKS - no OTHER flaws or defects - Hardcover in Dust Jacket as issued. DUST JACKET IN PROTECTIVE BRODART COVER - A VERY COLLECTIBLE COPY OF THIS BOOK - PHOTOS OF THE ACTUAL BOOK SENT UPON REQUEST. THIS IS AN INTRODUCTORY PRICE FOR OUR GRAND RE-OPENING. ALL PRICES WILL BE ADJUSTED IN JUNE TO REFLECT MARKET PRICES. The boards Are Clean, Not Bumped. Fore Edges Are Clean. Dust Jacket Is In Fine Condition. No Chipping, Crinkles, or tears. Not Price Clipped. All books are boxed and shipped with bubble wrap - ALL BOOKS HAVE BEEN BOXED IN CLIMATE CONTROLLED STORAGE AND HAVE NOT BEEN TOUCHED BY ANY OTHER HUMAN THAN ME FOR AT LEAST THE LAST 10 YEARS - ALL BOOKS ARE SEALED AND BUBBLE WRAPPED AND SHIPPED IN BOXES - YOU CAN BUY HERE WITH CONFIDENCE KNOWING THAT A BUNCH OF STRANGERS HAVE NOT HANDLED YOUR BOOK -. Signed by Author(s). Seller Inventory # 003179

Shipping: US$ 21.98
From United Kingdom to U.S.A.
Destination, rates & speeds