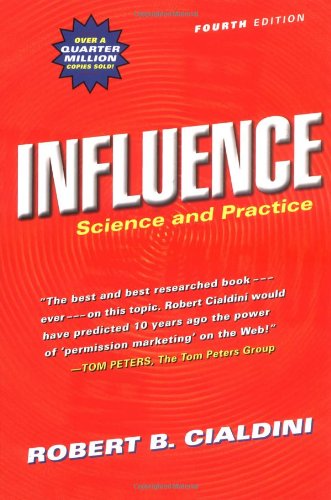 Influence: Science and Practice is an examination of the psychology of compliance (i.e. uncovering which factors cause a person to say “yes” to another's request).

Written in a narrative style combined with scholarly research, Cialdini combines evidence from experimental work with the techniques and strategies he gathered while working as a salesperson, fundraiser, advertiser, and in other positions inside organizations that commonly use compliance tactics to get us to say “yes.” Widely used in classes, as well as sold to people operating successfully in the business world, the eagerly awaited revision of Influence reminds the reader of the power of persuasion.

· Engaging writing style with amusing anecdotes.
· Includes citations from both recent and classic research.
· Describes how to resist unwanted influence attempts.
· Well known and influential author speaks frequently on “The Power of Ethical Influence” to such organizations as IBM, the Mayo Clinic, and NATO.

NEW TO THIS EDITION:

· New reports from readers illustrate how a principle has worked on or for them.
· Additional examples from current events illustrate psychological research, such as holiday gift crazes for Beanie Babies, Furbies, and Pokemon; the Columbine High School shootings; and the FBI's decision to attack Branch Davidian headquarters in Waco, Texas.

Over a quarter million copies sold!

How does this information make you feel about the book? If, even for a moment, you thought that a proven and popular book might be the one you were interested in, you may have been persuaded by a potent principle of influence—in this case, the principle of social proof.

Have you ever found yourself saying “yes” to a telemarketer or to a child selling candy and then wonder why you have just agreed to subscribe to a magazine that you really aren't interested in or to buy a candy bar that you really don't want? In this revised, updated, and expanded book, not only will you find out what techniques were used to get you to say yes, but you will also learn some worthwhile ways to defend yourself from future requests.