Items related to The Longman Anthology of British Literature, Volume... 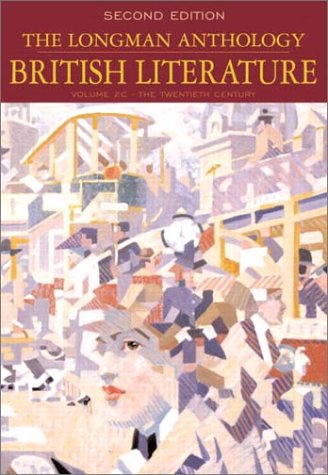 Volume 2C: The 20th Century of The Longman Anthology of British Literature is a comprehensive and thoughtfully arranged anthology that offers a rich selection of major British authors throughout the 20th Century. The anthology includes Perspectives and Companion Readings, which show how major literary writings interrelate with and respond to various social, historical, and cultural events of Great Britain in the 20th Century. With a generous representation of fiction, drama, and poetry, the second edition includes major additions of important works and an expanded illustration program. Fresh and up-to-date introductions and notes are written by an editorial team whose members are all actively engaged in teaching and in current scholarship, and illustrations show both artistic and cultural developments of the period. For those interested in British Literature of the Twentieth Century.

Kevin J. H. Dettmar is W. M. Keck Professor and Chair, Department of English, at Pomona College, and Past President of the Modernist Studies Association.  He is the author of The Illicit Joyce of Postmodernism and Is Rock Dead?, and the editor of Rereading the New: A Backward Glance at Modernism; Marketing Modernisms: Self-Promotion, Canonization, and Rereading; Reading Rock & Roll: Authenticity, Appropriation, Aesthetics; the Barnes & Noble Classics edition of James Joyce’s A Portrait of the Artist as a Young Man and Dubliners; and The Blackwell Companion to Modernist Literature and Culture, and co-general editor of The Longman Anthology of British Literature.

Jennifer Wicke is Professor of English at the University of Virginia.  Her teaching and research areas include nineteenth- and twentieth-century British and American literature, comparative and international modernisms, literary and cultural theory, and studies of mass culture, aesthetic value, and global culture.  She is the author of Advertising Fictions: Literature, Advertisement, and Social Reading, and co-editor of Feminism and Postmodernism with Margaret Ferguson; she has also written widely on Joyce, celebrity, and the academy.