Items related to Created Equal: A Social and Political History of the... 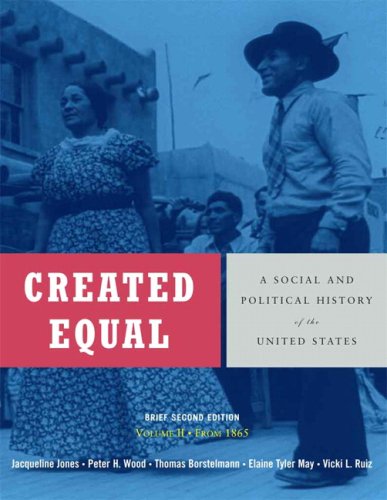 With its inclusive view of American history, Created Equal, Brief Edition, Volume Two emphasizes social history–including the lives and labors of women, immigrants, working people, and minorities in all regions of the country–while delivering the basics of political and economic history.

In this streamlined version of Created Equal, the authors have preserved the chronological framework and strong narrative thread, the rich tapestry of people and events, the engaging and illuminating stories, and the Interpreting History features of the original text, but have sharpened the presentation and prose condensing each chapter by 25 percent.

Want to save time and improve results?

MyHistoryLab is a fun, interactive online resource that gives you everything you need to ace this history course–all in one easy-to-use Web site. Log onto www.MyHistoryLab.com and find a wealth of activities, practice exams & tests, interactive maps, and much more!

Find answers to your concerns...
I’m confused about what primary sources are!
My professor assigned Sinclair’s,The Jungle. That’s $15 I don’t have!
I’d like to get more out of the textbook I’m using.
I’m struggling with this course, but I can’t afford the study guide.

If this text did not come with a MyHistoryLab access code, visit www.myhistorylab.com to purchase a subscription.

JACQUELINE JONES was born in Christiana, Delaware, a small town of 400 people in the northern part of the state. The local public school was desegregated in 1955, when she was a third-grader. That event, combined with the peculiar social etiquette of relations between blacks and whites in the town, sparked her interest in American history. She attended the University of Delaware in nearby Newark, and went on to graduate school at the University of Wisconsin-Madison, where she received her Ph.D. in history. Her scholarly interests have evolved over time, focusing on American labor, women, African American, and southern history. One of her biggest challenges has been to balance her responsibilities as teacher, historian, wife, and mother of two daughters. One of her proudest achievements is the fact that she has been able to teach full-time and still pick up her daughters at school every day at 2:30 in the afternoon (thanks to a flexible professor¹s schedule). She is the author of several books, including Soldiers of Light and Love: Northern Teachers and Georgia Blacks; Labor of Love, Labor of Sorrow: Black Women, Work, and Family Since Slavery, which won the Bancroft Prize and was a finalist for a Pulitzer Prize; The Dispossessed: America's Underclasses Since the Civil War; and American Work: Four Centuries of Black and White Labor. In 2001, she completed a memoir that recounts her childhood in Christiana: Creek Walking: Growing Up in Delaware in the 1950s. She teaches American history at Brandeis University, where she is Harry S. Truman Professor. In 1999, she received a MacArthur Fellowship.

PETER H. WOOD was born in St. Louis (before the famous arch was built). He recalls seeing Jackie Robinson play against the Cardinals, visiting the Court House where the Dred Scott case originated, and traveling up the Mississippi to Hannibal, birthplace of Mark Twain. Summer work on the northern Great Lakes aroused his interest in Native American cultures, past and present. He studied at Harvard and at Oxford, where he was a Rhodes Scholar. His pioneering book, Black Majority, concerning slavery in colonial South Carolina, won the Beveridge Prize of the American Historical Association. Since 1975, he has taught early American history at Duke University, where he also coached the women's lacrosse club for three years. The topics of his articles range from the French explorer LaSalle to Gerald Ford's pardon of Richard Nixon. He is the co-author of Winslow Homer's Images of Blacks and Natives and Newcomers, a book about early North Carolina. In 1989 he co-edited Powhatan's Mantle: Indians in the Colonial Southeast. His demographic essay in that volume provided the first clear picture of population change in the 18th-Century South. Dr. Wood has served on the boards of the Highlander Center, Harvard University, Houston's Rothko Chapel, the Menil Foundation, and the Institute of Early American History and Culture in Williamsburg. He is married to colonial historian Elizabeth Fenn; his varied interests include archaeology, documentary film, and growing gourds. He keeps a baseball bat used by Ted Williams beside his desk.

THOMAS BORSTELMANN the son of a university psychologist, has taught at the elementary, high school, and college levels. He taught second-grade physical education, taught and coached high school lacrosse, soccer, and basketball, and since 1991 has taught American history at Cornell University. In addition to his teaching experience, he also served as "Head Maid" of a conference center near Lake Tahoe. He lives with his wife and two sons in Syracuse, New York, where his greatest challenge — and delight — is doing the bulk of childcare while commuting sixty miles to Cornell. An avid bicyclist, runner, and cross-country skier, he earned his B.A. from Stanford University in 1980 and Ph.D. from Duke University in 1990. He became a historian in order to figure out the Cold War and American race relations, in part because he had grown up in the South. His first book on American relations with southern Africa won the Stuart L. Bernath Book Prize of the Society for Historians of Foreign Relations. His second book, The Cold War and the Color Line, has just been published. His commitment to the classroom remains clear at Cornell University, where he has won a major teaching award — the Robert and Helen Appel Fellowship. He found writing Created Equal a natural complement to what he does in the classroom, trying to provide both telling details of the American past and the broad picture of how the United States has developed as it has. A specialist in U.S. foreign relations, he is equally fascinated with domestic politics and social change. He is currently at work on a book on the 1970s.

ELAINE TYLER MAY grew up in the shadow of Hollywood, performing in neighborhood circuses with her friends. She went to high school before girls could play on sports teams, so she spent her after-school hours as a cheerleader and her summer days as a bodysurfing beach bum. Her passion for American history developed in college when she spent her junior year in Japan. The year was 1968. The Vietnam War was raging, along with turmoil at home. As an American in Asia, frequently called upon to explain her nation's actions, she yearned for a deeper understanding of America's past and its place in the world. She returned home to study history at UCLA, where she earned her BA, MA, and Ph.D. She has taught at Princeton and Harvard universities and since 1978 at the University of Minnesota. She has written four books examining the relationship between politics, public policy, and private life. Her widely acclaimed Homeward Bound: American Families in the Cold War Era was the first study to link the baby boom and suburbia to the politics of the Cold War. The Chronicle of Higher Education featured Barren in the Promised Land: Childless Americans and the Pursuit of Happiness as a pioneering study of the history of reproduction. Lingua Franca named her co-edited volume Here, There, and Everywhere: The Foreign Politics of American Popular Culture as a "Breakthrough Book." She served as president of the American Studies Association in 1996, and as Distinguished Fulbright Professor of American History in Dublin, Ireland, in 1997. She is married to historian Larry May and has three children who have inherited their parents' passion for history.

VICKIE L. RUIZ is Professor of History and Chicano/Latino Studies at the University of California, Irvine. For her, history remains a grand adventure, one that began at the kitchen table listening to the stories of her mother and grandmother and then took flight aboard the local bookmobile. She read constantly as she sat on the dock catching small fish ("grunts") to be used as bait on her father's fishing boat. As she grew older, she was promoted to working with her mother selling tickets for the Blue Sea II. The first in her family to receive an advanced degree, she graduated from Gulf Coast Community College and Florida State University, then went on to earn a Ph.D. in history at Stanford in 1972, the fourth Mexican American woman to receive a doctorate in history. Her first book, Cannery Women, Cannery Lives, received an award from the National Women¹s Political Caucus and her second, From Out of the Shadows: Mexican Women in 20th-Century America, was named a Choice Outstanding Academic Book of 1998 by the American Library Association. She is co-editor with Ellen Carol Dubois of Unequal Sisters: A Multicultural Reader in U.S. Women's History. She and Virginia Sánchez Korrol have embarked on co-editing Latinas in the United States: A Historical Encyclopedia and both were recognized by Latina Magazine as "Latinas of the Year in Education for 2000." Active in student mentorship projects, summer institutes for teachers, and public humanities programs, Ruiz served as a Clinton recess appointee to the National Council of the Humanities. She has also served on the national governing bodies of the American Historical Association, the Organization of American Histories, and the American Studies Association. She is President-elect of the Pacific Coast Branch of the American Historical Association. The mother of two grown sons, she is married to Victor Becerra, urban planner and gourmet cook extraordinaire.

2. Created Equal: A Social and Political History of the United States, Brief Edition, Volume 2 (from 18

4. CREATED EQUAL: A SOCIAL AND POLI