Items related to Earth System, The 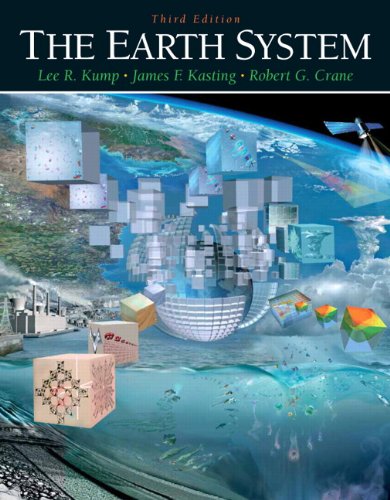 The first book of its kind to address the issues of global change from a true Earth systems perspective, The Earth System offers a solid emphasis on lessons from Earth's history that may guide decision-making in the future. The authors' systems theory approach looks holistically at all that happens on Earth and the interactions of all that is here—such as the effect of weather on land, the effect of erosion on the ocean, the chemical changes that occur—and emphasizes that these processes do not happen in a vacuum. An emphasis on global change addresses such modern issues as global warming, ozone depletion, and biodiversity loss.A variety of boxed inserts address topical issues related to the material presented, giving readers appealing visual and highlighted aids.
Global Change; Daisyworld: An Introduction to Systems; Global Energy Balance: The Greenhouse Effect; The Atmospheric Circulation System; The Circulation of the Oceans; The Cryosphere; Circulation of the Solid Earth: Plate Tectonics; Recycling of the Elements; Focus on the Biota: Metabolism, Ecosystems and Biodiversity; Origin of the Earth and of Life; Effect of Life on the Atmosphere: The Rise of Oxygen and Ozone; Long-Term Climate Regulation; Biodiversity Through Earth History; Pleistocene Glaciations; Global Warming, Part 1: The Scientific Evidence; Global Warming, Part 2: Impacts, Adaptation, and Mitigation; Ozone Depletion; Human Threats to Biodiversity; Climate Stability on Earth and Earth-Like Planets.
A useful reference for anyone who wants to learn more about Earth processes to become a more well-informed consumer.

Lee R. Kump is a Professor in the Department of Geosciences, and an associate of the Earth System Science Center and Astrobiology Research Center at the Pennsylvania State University. A native of Minnesota, he received his bachelor's degree in geophysical sciences from the University of Chicago in 1981, and his Ph.D. in marine sciences from the University of South Florida in 1986. While in Florida he spent two summers as a geologist with the United States Geological Survey's Fisher Island Station. In August of 1986 he joined the faculty at Penn State.

Dr. Kump is a Fellow of the Geological Societies of America and London, and a member of the American Geophysical Union, the Geochemical Society, and the Geochemistry Division of the American Chemical Society. His research has been funded by the Environmental Protection Agency, the National Science Foundation, NASA, the Gas Research Institute, the Petroleum Research Fund of the American Chemical Society, and Texaco. Dr. Kump became Associate Director of the CIAR Earth System Evolution Program in 2004. Dr. Kump's primary research effort is in the development of numerical models of global biogeochemical cycles. His early work focussed on the carbon and sulfur cycles, and on the feedbacks that regulate atmospheric oxygen levels. More recently his emphasis has shifted to the study of the dynamic coupling between global climate and biogeochemical cycles. He studies the long-term evolution of the oceans and atmosphere, using a combination of field work, laboratory analysis, and numerical modeling.

James Kasting is a Distinguished Professor of Geosciences at Penn State University. He received his undergraduate degree from Harvard University in Chemistry and Physics and did his Ph.D. at the University of Michigan in Atmospheric Sciences. Prior to coming to Penn State in 1988, he spent 7 years in the Space Science Division at NASA Ames Research Center. His research focuses on the evolution of planetary atmospheres, particularly the question of why the atmospheres of Mars and Venus are so different from that of Earth. He is also interested in the question of whether habitable planets exist around other stars and is involved with NASA’s proposed Terrestrial Planet Finder Mission(s), which will try to answer that question over the next 15-20 years.

Dr. Robert Crane received his bachelor's degree in physical geography from the University of Reading, England, in 1976. He did graduate work in polar climatology, microwave remote sensing, and sea ice-atmosphere interactions at the University of Colorado's Institute for Arctic and Alpine Research (INSTAAR) and the National Snow and Ice Data Center, receiving a Master's degree in 1978 and a Ph.D. in 1981. As a Research Associate in the Cooperative Institute for Research in Environmental Sciences (CIRES), he continued his work on the microwave remote sensing of sea ice. Subsequently, Dr. Crane spent a year as a visiting professor at the University of Saskatchewan.

He joined the faculty of the Pennsylvania State University in 1985. Dr. Crane held a joint appointment in the Department of Geography and in the Earth System Science Center from 1985 to 1993, serving as Associate Director of the Center from 1990 to 1993. He was appointed Associate Dean for Education in the College of Earth and Mineral Sciences in 1993, and currently holds the position of Associate Dean and Professor of Geography. His areas of specialization include sea ice-atmosphere interactions, synoptic climatology, and regional-scale climate change.

Book Description Prentice Hall, 2009. Softcover. Condition: New. ***International Edition***Soft cover/Paperback*** Textbook printed in English. ***Brand New***. Most international edition has different ISBN and Cover design. Some book may show sales disclaimer such as "Not for Sale or Restricted in US" on the cover page but it is absolutely legal to use. All textbook arrives within 5-7business days. Please provides valid phone number with your order for easy delivery. Seller Inventory # 9780321597793

Book Description Pearson, 2009. soft cover. Condition: New. International Edition. No supplemental materials. International Editions may have a different cover or ISBN but generally have the exact same content as the US edition, just at a more affordable price. In some cases, end of chapter questions may vary slightly from the US edition. International Editions are typically printed in grayscale, and likely will not have any color throughout the book. New. Books ship from multiple locations depending on availability. All orders are shipped with tracking information. We take pride in our customer service. Please contact us if you have any questions regarding this listing. Seller Inventory # 12596