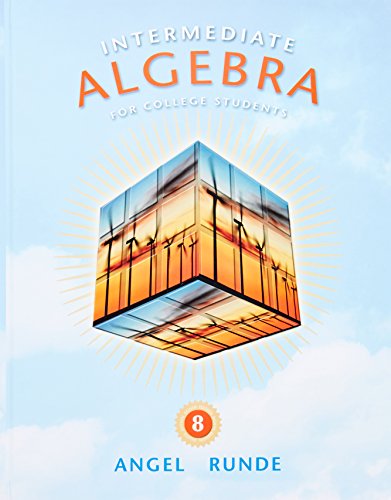 The Angel author team meets the needs of today’s learners by pairing concise explanations with the new Understanding Algebra feature and an updated approach to examples. Discussions throughout the text have been thoroughly revised for brevity and accessibility. Whenever possible, a visual example or diagram is used to explain concepts and procedures. Understanding Algebra call-outs highlight key points throughout the text, allowing readers to identify important points at a glance. The updated examples use color to highlight the variables and important notation to clearly illustrate the solution process.

Allen R. Angel received his AAS in Electrical Technology from New York City Community College. He then received his BS in Physics and his MS in Mathematics from SUNY at New Paltz, and he took additional graduate work at Rutgers University. He is Professor Emeritus at Monroe Community College in Rochester, New York where he served for many years as the chair of the Mathematics Department. He also served as the Assistant Director of the National Science Foundation Summer Institutes at Rutgers University from 1967–73. He served as the President of the New York State Mathematics Association of Two Year Colleges (NYSMATYC) and the Northeast Vice President of the American Mathematics Association of Two Year Colleges (AMATYC). He is the recipient of many awards including a number of NISOD Excellence in Teaching Awards, NYSMATYC's Outstanding Contributions to Mathematics Education Award, and AMATYC's President Award. Allen enjoy tennis, worldwide travel, and visiting with his children and granddaughter.

Dennis Runde received his BS and MS in mathematics from the University of Wisconsin—Platteville and Milwaukee, respectively. He has a PhD in Mathematics Education from the University of South Florida. He has been teaching for twenty years at State College of Florida, Manatee, and Sarasota Counties and for ten years at Saint Stephen's Episcopal School. Besides coaching little league baseball, his other interests include history, politics, fishing, canoeing, and cooking. He and his wife Kristin stay busy keeping up with their three sons–Alex, Nick, and Max.