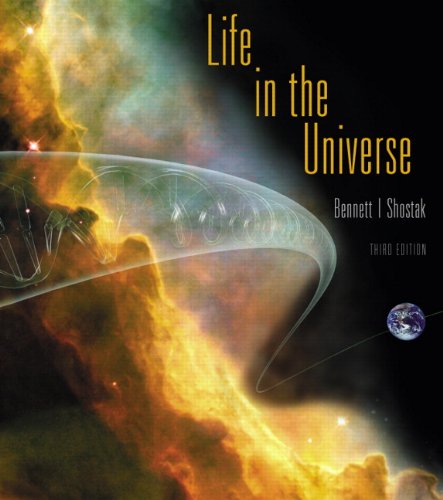 Life in the Universe takes non-science majors on a journey through the solar system and beyond, using a rigorous yet accessible introduction to astronomy, biology, and geology to explain natural phenomena and to explore profound scientific questions about astrobiology. The Third Edition has been thoroughly revised to include updated scientific discoveries, new Cosmic Context two-page spreads, and an updated Companion Website.

Designed for astrobiology courses but also suitable for introductory astronomy courses, Life in the Universe captures your imagination by exploring fundamental pan-scientific questions: What is life? How did life begin on Earth? What are the most extreme forms of life currently known? Is it reasonable to imagine life beyond Earth?

The text motivates you to develop basic reasoning skills and an understanding of the process of science through skillful writing and a wealth of pedagogical features, such as Learning Goals that keep you focused on key concepts. Sidebars provide optional mathematical material for courses that fulfill quantitative requirements.

Jeffrey Bennett holds a B.A. (1981) in biophysics from the University of California, San Diego, and an M.S. and Ph.D. (1987) in astrophysics from the University of Colorado, Boulder. He has taught at every level from preschool through graduate school, including more than 50 college classes in astronomy, physics, mathematics, and education. He served two years as a visiting senior scientist at NASA headquarters, where he created NASA's "IDEAS" program, started a program to fly teachers aboard NASA's airborne observatories (including SOFIA), and worked on numerous educational programs for the Hubble Space Telescope and other space science missions. He also proposed the idea for and helped develop both the Colorado Scale Model Solar System on the CU-Boulder campus and the Voyage Scale Model Solar System on the National Mall in Washington, D.C. In addition to this astronomy textbook, he has written college-level textbooks in astrobiology, mathematics, and statistics; two books for the general public: On the Cosmic Horizon (Pearson Addison-Wesley, 2001) and Beyond UFOs (Princeton University Press, 2008); and an award-winning series of children's books that includes Max Goes to the Moon, Max Goes to Mars, Max Goes to Jupiter, and Max's Ice Age Adventure. When not working, he enjoys participating in masters swimming and in the daily adventures of life with his wife, Lisa; his children, Grant and Brooke; and his dog, Cosmo. His personal Website is www.jeffreybennett.com.

Seth Shostak earned his B.A. in physics from Princeton University (1965) and a Ph.D. in astronomy from the California Institute of Technology (1972). He is currently a senior astronomer at the SETI Institute in Mountain View, California, where he helps press the search for intelligent cosmic company. For much of his career, Seth conducted radio astronomy research on galaxies and investigated the fact that these massive objects contain large amounts of unseen mass. He has worked at the National Radio Astronomy Observatory in Charlottesville, Virginia, as well as at the Kapteyn Astronomical Institute in Groningen, the Netherlands (where he learned to speak bad Dutch). Seth also founded and ran a company that produced computer animation for television. He has written several hundred popular articles on various topics in astronomy, technology, film, and television. A frequent fixture on the lecture circuit, Seth gives approximately 70 talks annually at both educational and corporate institutions, and he is also a frequent commentator on astronomical matters for radio and television. His book Confessions of an Alien Hunter: A Scientist's Search for Extraterrestrial Intelligence (National Geographic, 2009) details the latest ideas, as well as the personal experience of his day job. When he’s not trying to track down aliens, Seth can often be found behind the microphone, as host of the SETI Institute's weekly, one-hour radio show about science, Are We Alone.