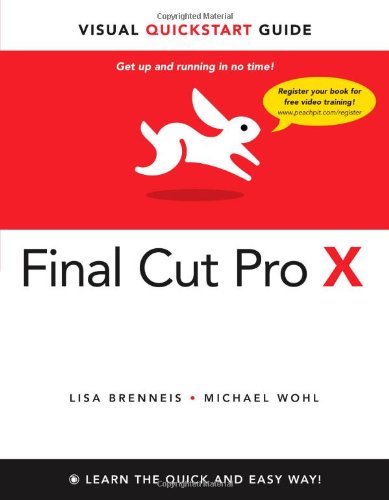 With this new release of Final Cut Pro, Apple has completely re-engineered its popular film and video editing software to include an incredible lineup of features intended to close the gap between the prosumers and the pros. Following right in step, this Visual QuickStart Guide has been completely revised to address all the new features as well as the new paradigm of editing that Apple has put forward. An undisputed master of the digital video medium, Lisa Brenneis once again demystifies the complexities of the program and she is joined this time by the Final Cut Pro guru Michael Wohl to provide a clear, straightforward guide to Final Cut Pro X. Tasked-based, step-by-step instructions and loads of visuals and time-saving tips make it so professionals and newcomers alike can quickly find and learn tasks specific to their needs, benefiting from the award-winning Visual QuickStart style. Topics covered include essential editing tasks and media-management strategies, transitions, effects and filters, rendering options, and much more. It includes coverage of all the new features such as the new dynamic interface, Magnetic Timeline, Clip Connections, Auditions, Content Auto-Analysis, Range-Based Keywords, and much more. Now in four-color, this must-have reference also includes several free downloadable videos from the publisher’s site.

Lisa Brenneis is the author of all previous editions of this best-selling reference to Final Cut Pro, as well as all editions of Final Cut Express: Visual QuickStart Guide. She’s worked on video games, documentaries, museum exhibits, music videos, and laser light shows. Her clients have included Disney, MCA/Universal, the Getty Museum, the Library of Congress, the International Olympic Committee, and Mattel, among others. Lisa’s video documentary, Eat at Bill’s: Life in the Monterey Market, was selected for the American Documentary Showcase aired as part of the PBS series “Natural Heroes.”

Michael Wohl is widely respected as one of the preeminent experts on Final Cut Pro. As part of the original engineering team, Michael helped design the workflow and interface that has earned Final Cut its award-winning reputation. He is also an award-winning filmmaker who has written, directed, and edited independent fi lms for more than fi fteen years. As a trainer and instructor, he has taught and designed curricula at institutions including UCLA, AFI, and San Francisco State University and has spoken at fi lm festivals and conferences including Sundance Film Festival, South by Southwest, Cinequest, DV Expo, Macworld, and NAB. Michael has written numerous books on Final Cut including Apple Pro Training Series: Final Cut Pro 7 Advanced Editing and Apple Pro Training Series: The Craft of Editing with Final Cut Pro.