Items related to Mathematical Proofs: A Transition to Advanced Mathematics:... 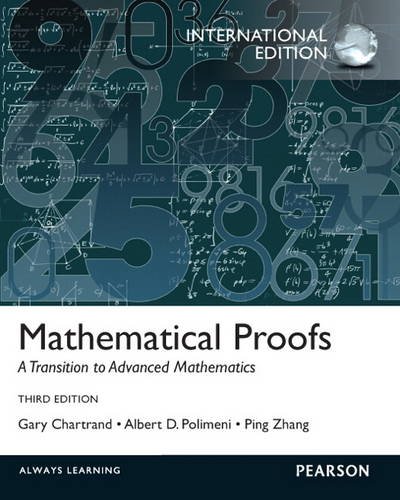 Mathematical Proofs: A Transition to Advanced Mathematics, Third Edition, prepares students for the more abstract mathematics courses that follow calculus. Appropriate for self-study or for use in the classroom, this text introduces students to proof techniques, analyzing proofs, and writing proofs of their own. Written in a clear, conversational style, this book provides a solid introduction to such topics as relations, functions, and cardinalities of sets, as well as the theoretical aspects of fields such as number theory, abstract algebra, and group theory. It is also a great reference text that students can look back to when writing or reading proofs in their more advanced courses.

Book Description Paperback. Condition: New. This is printed on High-Quality acid free paper "Brand New International Edition" Textbook which has different ISBN and Cover design than US Edition but same contents as the US edition. Some book may show sales disclaimer such as "Not for Sale or Restricted in US" on the cover page but it is absolutely legal to use. ** Not low quality India edition.** CD/DVD or access codes may not be included. Seller Inventory # GB201901736