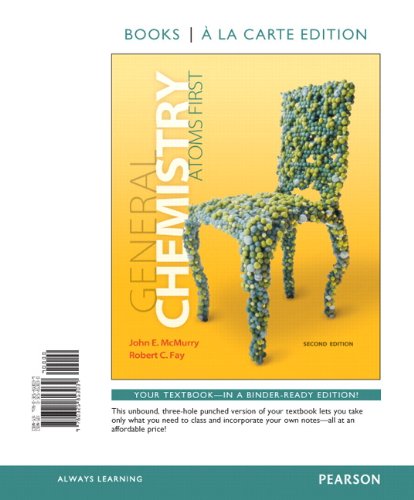 Educated at Harvard and Columbia, John McMurry has taught approximately 17,000 students in general and organic chemistry over a 30-year period. A Professor of Chemistry at Cornell University since 1980, Dr. McMurry previously spent 13 years on the faculty at the University of California at Santa Cruz. He has received numerous awards, including the Alfred P. Sloan Fellowship (1969-71), the National Institute of Health Career Development Award (1975-80), the Alexander von Humboldt Senior Scientist Award (1986-87), and the Max Planck Research Award (1991). Professor of Chemistry Robert C. Fay has been teaching general and inorganic chemistry at Cornell University since 1962. Known for his clear, well-organized lectures, Dr. Fay was the 1980 recipient of the Clark Distinguished Teaching Award. He has also taught as a visiting professor at Harvard University and the University of Bologna, Italy. He has been an NSF Science Faculty Fellow at the University of East Anglia and the University of Sussex, England, and a NATO/Heineman Senior Fellow at Oxford University.