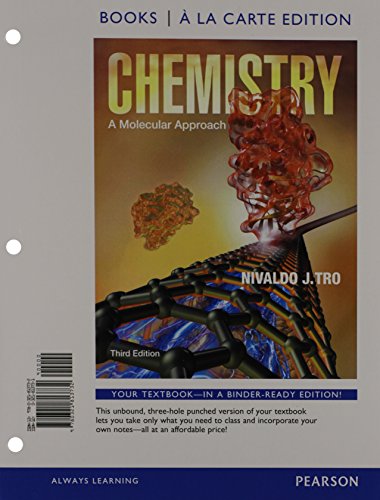 Chemistry: A Molecular Approach , Third Edition is an innovative, pedagogically driven text that explains challenging concepts in a student-oriented manner.  Nivaldo Tro creates a rigorous and accessible treatment of general chemistry in the context of relevance and the big picture. Chemistry is presented visually through multi-level images–macroscopic, molecular, and symbolic representations–helping students see the connections between the world they see around them (macroscopic), the atoms and molecules that compose the world (molecular), and the formulas they write down on paper (symbolic). The hallmarks of Dr. Tro’s problem-solving approach are reinforced through interactive media that provide students with an office-hour type of environment built around worked examples and expanded coverage on the latest developments in chemistry. Pioneering features allow students to sketch their ideas through new problems, and much more.

Nivaldo J. Tro received his BA degree from Westmont College and his PhD degree from Stanford University. He went on to a postdoctoral research position at the University of California at Berkeley. In 1990, he joined the chemistry faculty at Westmont College in Santa Barbara, California. Professor Tro has been honored as Westmont's outstanding teacher of the year three times (1994, 2001, and 2008). He was named Westmont's outstanding researcher of the year in 1996. Professor Tro lives in the foothills of Santa Barbara with his wife, Ann, and their four children, Michael, Alicia, Kyle, and Kaden. In his leisure time, Professor Tro likes to spend time with his family in the outdoors. He enjoys running, biking, surfing, and snowboarding.