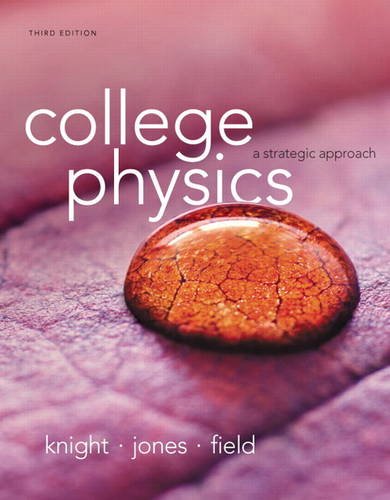 MasteringPhysics is not a self-paced technology and should only be purchased when required by an instructor.

Building on the research-proven instructional techniques introduced in Knight’s P hysics for Scientists and Engineers, College Physics: A Strategic Approach sets a new standard for algebra-based introductory physics—gaining widespread critical acclaim from professors and students alike. The text, supplements, and MasteringPhysics work together to help students see and understand the big picture, gain crucial problem-solving skills and confidence, and better prepare for lecture and their future.

For the Third Edition, Randy Knight, Brian Jones, and Stuart Field have incorporated student feedback and research to strengthen their focus on student learning, and to apply the best results from educational research and extensive user feedback and metadata.

This program presents an unparalleled teaching and learning experience, uniquely effective and integrated.

Building on the results of an extensive NSF-funded educational research program and detailed input from an unprecedented 4,500 students and 250 instructors, Randy Knight and Addison-Wesley published Physics for Scientists and Engineers in 2003. Already the most widely adopted new physics text published in more than 30 years, this book has attracted widespread critical acclaim. In College Physics: A Strategic Approach, Randy Knight is joined by Brian Jones and Stuart Field to carefully apply the best solutions from educational research to the algebra-based introductory physics course. Built from the ground up on a wealth of research into how readers learn physics and how they can be taught more effectively, College Physics leads readers to more proficient and long-lasting problem-solving skills, a deeper and better-connected understanding of the concepts, and a broader picture of the relevance of physics to the world around them. Optics: Wave Optics, Ray Optics, Optical Instruments. Electricity And Magnetism, Electric Forces and Fields, Electrical Potential, Current and Resistance, Circuits, Magnetic Fields and Forces, Electromagnetic Induction and Electromagnetic Waves, AC Circuits. Modern Physics, Relativity, Quantum Physics, Atoms and Molecules, Nuclear Physics. For all readers interested in algebra-based college physics.

Randy Knight has taught introductory physics for 32 years at Ohio State University and California Polytechnic University, where he is Professor Emeritus of Physics. Randy received a Ph.D. in physics from the University of California–Berkeley. He was a post-doctoral fellow at the Harvard-Smithsonian Center for Astrophysics before joining the faculty at Ohio State University. It was at Ohio State, under the mentorship of Professor Leonard Jossem, that he began to learn about the research in physics education that, many years later, led to Five Easy Lessons: Strategies for Successful Physics Teaching, Physics for Scientists and Engineers: A Strategic Approach, and now to this book. Randy’s research interests are in the fields of lasers, spectroscopy, and environmental science. When he’s not in front of a computer, you can find Randy hiking, sea kayaking, playing the piano, or spending time with his wife Sally and their six cats.

Brian Jones has won several teaching awards at Colorado State University during his 25 years teaching in the Department of Physics. His teaching focus in recent years has been the College Physics class, including writing problems for the MCAT exam and helping students review for this test. In 2011, Brian was awarded the Robert A. Millikan Medal of the American Association of Physics Teachers for his work as director of the Little Shop of Physics, a hands-on science outreach program. He is actively exploring the effectiveness of methods of informal science education and how to extend these lessons to the college classroom. Brian has been invited to give workshops on techniques of science instruction throughout the United States and in Belize, Chile, Ethiopia, Azerbaijan, Mexico, and Slovenia. Brian and his wife Carol have dozens of fruit trees and bushes in their yard, including an apple tree that was propagated from a tree in Isaac Newton’s garden.

Stuart Field has been interested in science and technology his whole life. While in school he built telescopes, electronic circuits, and computers. After attending Stanford University, he earned a Ph.D. at the University of Chicago, where he studied the properties of materials at ultralow temperatures. After completing a postdoctoral position at the Massachusetts Institute of Technology, he held a faculty position at the University of Michigan. Currently at Colorado State University, Stuart teaches a variety of physics courses, including algebra-based introductory physics, and was an early and enthusiastic adopter of Knight’s Physics for Scientists and Engineers. Stuart maintains an active research program in the area of superconductivity. Stuart enjoys Colorado's great outdoors, where he is an avid mountain biker; he also plays in local ice hockey leagues.

Book Description Pearson, 2014. soft cover. Condition: New. International Edition. No supplemental materials. International Editions may have a different cover or ISBN but generally have the exact same content as the US edition, just at a more affordable price. In some cases, end of chapter questions may vary slightly from the US edition. International Editions are typically printed in grayscale, and likely will not have any color throughout the book. New. Books ship from multiple locations depending on availability. All orders are shipped with tracking information. We take pride in our customer service. Please contact us if you have any questions regarding this listing. Seller Inventory # 12792