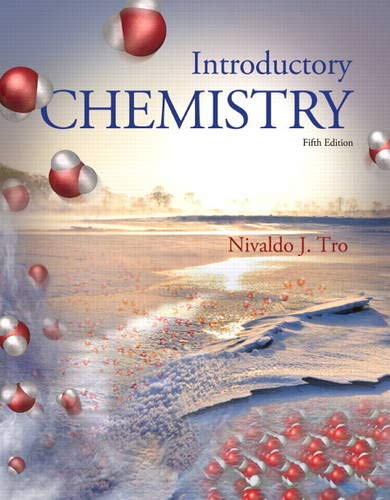 NOTE: This book does not come with Access Code

See how chemistry is relevant to your life

Now in its fifth edition, Introductory Chemistry continues to foster deep engagement in the course by showing how chemistry manifests in your daily life. Author Nivaldo Tro draws upon his classroom experience as an award-winning instructor to extend chemistry from the laboratory to your world, with relevant applications and a captivating writing style. Closely integrated with the fifth edition of Introductory Chemistry, MasteringChemistry gives you the tools you need to succeed in this course.

This program provides you a better learning experience. It will help you to:

Nivaldo Tro is currently chair of the department of chemistry at Westmont College in Santa Barbara, California, where he has been a faculty member since 1990.   He received his B.A degree in chemistry from Westmont College and earned a Ph.D. in chemistry from Stanford University, for work on developing and using optical techniques to study the adsorption and desorption of molecules to and from surfaces in ultrahigh vacuum. He then went on to the University of California at Berkeley, where he did post-doctoral research on ultra-fast reaction dynamics in solution.  Since coming to Westmont, Professor Tro has been awarded grants from the American Chemical Society Petroleum Research Fund, from Research Corporation, and from the National Science Foundation to study the dynamics of various processes occurring in thin adlayer films adsorbed on dielectric surfaces.  Honored as Westmont’s outstanding teacher of the year in 1994, 2001, and 2008, he was also named the college’s outstanding researcher of the year in 1996. Professor Tro lives in Santa Barbara with his wife, Ann, and their four children, Michael, Alicia, Kyle, and Kaden. For leisure, he enjoys reading, writing, snowboarding, biking, and other outdoor activities with his family.

Book Description Softcover. Condition: New. ***International Edition***Soft cover/Paperback*** Textbook printed in English. ***Brand New***. Most international edition has different ISBN and Cover design. Some book may show sales disclaimer such as "Not for Sale or Restricted in US" on the cover page but it is absolutely legal to use. All textbook arrives within 5-7business days. Please provides valid phone number with your order for easy delivery. Seller Inventory # dp9780321910295