Items related to Using and Understanding Mathematics: A Quantitative... 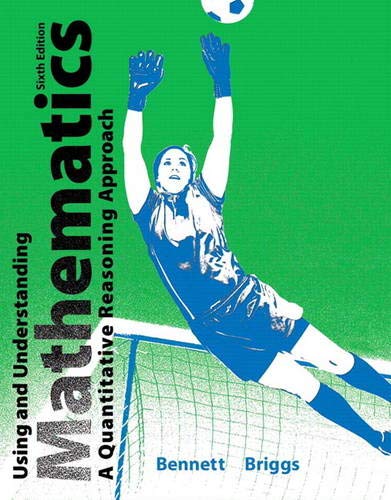 NOTE: THIS IS A STAND ALONE BOOK. ACCESS CODE IS NOT INCLUDED WITH THIS BOOK

Using and Understanding Mathematics: A Quantitative Reasoning Approach prepares students for the mathematics they will encounter in college courses, their future career, and life in general. Its quantitative reasoning approach helps students to build the skills needed to understand major issues in everyday life, and compels students to acquire the problem-solving tools that they will need to think critically about quantitative issues in contemporary society.

This program will provide a better teaching and learning experience–for you and your students. Here’s how:

Note: You are purchasing a standalone product; MyMathLab does not come packaged with this content. MyMathLab is not a self-paced technology and should only be purchased when required by an instructor. If you would like to purchase both the physical text and MyMathLab, search for:

Jeffrey Bennett specializes in mathematics and science education. He has taught at every level from pre-school through graduate school, including more than 50 college courses in mathematics, physics, astronomy, and education. His work on Using and Understanding Mathematics began in 1987, when he helped create a new mathematics course for the University of Colorado’s core curriculum. Variations on this course, with its quantitative reasoning approach, are now taught at hundreds of colleges nationwide. In addition to his work in mathematics, Dr. Bennett (whose PhD is in astrophysics) has written leading college-level textbooks in astronomy, statistics, and the new science of astrobiology, as well as books for the general public. He also proposed and developed both the Colorado Scale Model Solar System on the University of Colorado at Boulder campus and the Voyage Scale Model Solar System, a permanent, outdoor exhibit on the National Mall in Washington, DC. He has recently begun writing science books for children, including the award-winning Max Goes to the Moon and Max Goes to Mars. When not working, he enjoys swimming as well as hiking the trails of Boulder, Colorado with his family.

William L. Briggs has been on the mathematics faculty at the University of Colorado at Denver for 22 years. He teaches numerous courses within the undergraduate and graduate curriculum, and has special interest in teaching calculus, differential equations, and mathematical modeling. He developed the quantitative reasoning course for liberal arts students at University of Colorado at Denver supported by his textbook Using and Understanding Mathematics. He has written two other tutorial monographs, The Multigrid Tutorial and The DFT: An Owner's Manual for the Discrete Fourier Transform, as well as Ants, Bikes, Clocks, a mathematical problem-solving text for undergraduates. He is a University of Colorado President's Teaching Scholar, an Outstanding Teacher awardee of the Rocky Mountain Section of the MAA, and the recipient of a Fulbright Fellowship to Ireland. Bill lives with his wife, Julie, and their Gordon setter, Seamus, in Boulder, Colorado. He loves to bake bread, run trails, and rock climb in the mountains near his home.

Book Description Pearson, 2014. Hardcover. Condition: New. 6. ***International Edition***Soft cover/Paperback*** Textbook printed in English. ***Brand New***. Most international edition has different ISBN and Cover design. Some book may show sales disclaimer such as "Not for Sale or Restricted in US" on the cover page but it is absolutely legal to use. All textbook arrives within 5-7business days. Please provides valid phone number with your order for easy delivery. Seller Inventory # LD9780321914620

Book Description Pearson, 2014. soft cover. Condition: New. International Edition. No supplemental materials. International Editions may have a different cover or ISBN but generally have the exact same content as the US edition, just at a more affordable price. In some cases, end of chapter questions may vary slightly from the US edition. International Editions are typically printed in grayscale, and likely will not have any color throughout the book. New. Books ship from multiple locations depending on availability. All orders are shipped with tracking information. We take pride in our customer service. Please contact us if you have any questions regarding this listing. Seller Inventory # 12816