Items related to Literature: An Introduction to Fiction, Poetry, Drama,... 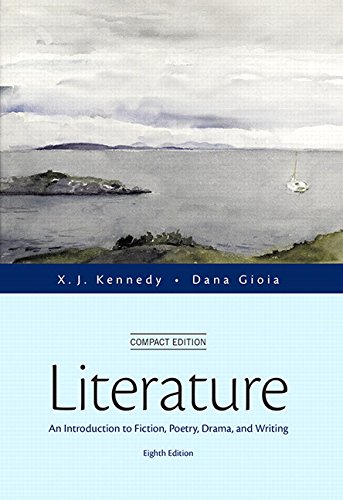 Note: You are purchasing a standalone product; MyLiteratureLab® does not come packaged with this content. If you would like to purchase both the physical text and MyLiteratureLab, search for:

MyLiteratureLab is not a self-paced technology and should only be purchased when required by an instructor.

For introductory courses in Literature.

Cultivate a Love of Literature...

A streamlined version of Kennedy/Gioia’s acclaimed literary anthology, Literature: An Introduction to Fiction, Poetry, Drama, and Writing, Compact Edition, 8/e is a book to lead readers beyond the boundaries of self to see the world through the eyes of others. The authors developed this text with two major goals in mind: to introduce college students to the appreciation and experience of literature in its major forms and to develop students’ abilities to think critically and communicate effectively through writing.  The book is built on the assumption that great literature can enrich and enlarge the lives it touches. Both editors, literary writers themselves, believe that textbooks should be not only informative and accurate but also lively, accessible, and engaging.

This title is also available with MyLiteratureLab – an online resource that works with our literature anthologies to provide engaging experiences to instructors and students.

X. J. Kennedy , after graduation from Seton Hall and Columbia, became a journalist second class in the Navy (“Actually, I was pretty eighth class”). His poems, some published in the New Yorker, were first collected in Nude Descending a Staircase (1961). Since then he has written six more collections, several widely adopted literature and writing textbooks, and seventeen books for children, including two novels. He has taught at Michigan, North Carolina (Greensboro), California (Irvine), Wellesley, Tufts, and Leeds. Cited in Bartlett’s Familiar Quotations and reprinted in some 200 anthologies, his verse has brought him a Guggenheim fellowship, a Lamont Award, a Los Angeles Times Book Prize, an award from the American Academy and Institute of Arts and Letters, an Aiken-Taylor prize, the Robert Frost Medal of the Poetry Society of America, and the Award for Poetry for Children from the National Council of Teachers of English. He now lives in Lexington, Massachusetts, where he and his wife Dorothy have collaborated on four books and five children.

Dana Gioia is a poet, critic, and teacher. He was appointed California's Poet Laureate for a two-year term. Born in Los Angeles of Italian and Mexican ancestry, he attended Stanford and Harvard before taking a detour into business. After years of writing and reading late in the evenings after work, he quit a corporate vice presidency to write. He has published four collections of poetry, Daily Horoscope (1986), The Gods of Winter (1991), Interrogations at Noon (2001), which won the American Book Award, and Pity the Beautiful (2012); and three critical volumes, including Can Poetry Matter? (1992), an influential study of poetry’s place in contemporary America. Gioia has taught at Johns Hopkins, Sarah Lawrence, Wesleyan (Connecticut), Mercer, and Colorado College. From 2003-2009 he served as the Chairman of the National Endowments for the Arts. At the NEA he created the largest literary programs in federal history, including Shakespeare in American Communities and Poetry Out Loud, the national high school poetry recitation contest. He also led the campaign to restore active literary reading by creating The Big Read, which helped reverse a quarter century of decline in U.S. reading. He is currently the Judge Widney Professor of Poetry and Public Culture at the University of Southern California.