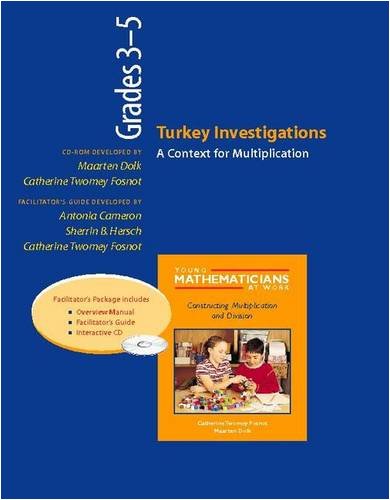 Recommended by the Ontario Ministry of Education

In Turkey Investigations, your workshop participants will observe third graders as they begin to construct ideas about multiplication. Exploring contexts of weights and measures over three days, the children invent strategies such as repeated addition on the number line, doubling and halving, and using ratio tables. Teachers will discover what a valuable tool real-life contexts are for building a solid foundation in multiplication.

Antonia Cameron is a co-principal investigator of the National Science Foundation funded project, Mathematics in the City at The City College of the City of New York. She also has been a frequent workshop leader using the CD-ROMs developed for the Resource Package, as well as a researcher involved in the field testing of the materials.

Maarten Dolk is a researcher and developer at the Freudenthal Institute for science and mathematics education in the Netherlands. He is involved in the development and research of in-service and multimedia in-service materials for teachers, staff developers, and teacher educators in a number of countries. He has been a collaborating partner in Mathematics in the City since its inception and is co-author of the first three books in the Young Mathematicians at Work series.

Catherine Twomey Fosnot is the Founding Director of Mathematics in the City and former Professor of Education at The City College of the City of New York. She has twice received the "best writing" award from AERA's Constructivist SIG and she was the recipient of the "young scholar" award by Educational Communication and Technology Journal. She is the lead author of the Contexts for Learning Mathematics series as well as the Young Mathematicians at Work series.

Sherrin B. Hersch is a co-principal investigator at The City College of the City of New York, overseeing mathematics grants funded by several national agencies. She frequently has led workshops using the CD-ROMs developed for the Resource Package, and has field tested the materials. Her deep interest in learning and teaching was shaped by her years working with children as a primary classroom teacher.