Items related to The Savage Detectives 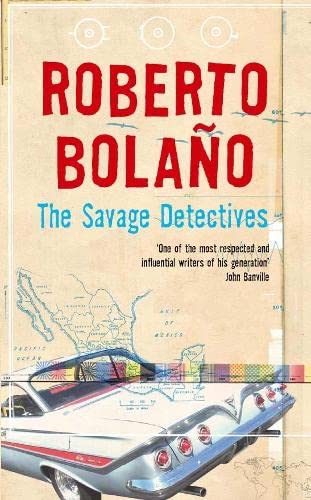 In this dazzling novel, the book that established his international reputation, Roberto Bolaño tells the story of two modern-day Quixotes--the last survivors of an underground literary movement, perhaps of literature itself--on a tragicomic quest through a darkening, entropic universe: our own. The Savage Detectives is an exuberant, raunchy, wildly inventive, and ambitious novel from one of the greatest Latin American authors of our age.

Amazon Significant Seven, May 2007: The late Chilean writer Roberto Bolaño has been called the García Marquez of his generation, but his novel The Savage Detectives is a lot closer to Y Tu Mamá También than it is to One Hundred Years of Solitude. Hilarious and sexy, meandering and melancholy, full of inside jokes about Latin American literati that you don't have to understand to enjoy, The Savage Detectives is a companionable and complicated road trip through Mexico City, Barcelona, Israel, Liberia, and finally the desert of northern Mexico. It's the first of Bolaño's two giant masterpieces to be translated into English (the second, 2666, is due out next year), and you can see how he's influenced an era. --Tom Nissley

Natasha Wimmer translated books by Mario Vargas Llosa and Bolaño's good friend Rodrigo Fresán, among others, before tackling Bolaño's two long novels, The Savage Detectives and the upcoming 2666, which have had an immeasurable impact on modern Latin American fiction (and perhaps now on Anglo American writing as well). We asked her a few questions about the process of bringing such a vast and vital book into English.

Amazon.com: How did you come to literary translation, and to translating a work of such prestige? Is the community of Spanish-to-English literary translators small, given Americans' famous lack of interest in translated work?

Wimmer: Luck, really. I lived in Spain when I was little, which is where I learned Spanish, and then I studied Spanish literature in college, but it was a job in publishing--at FSG, the publisher of The Savage Detectives--that made me realize that literary translation was something I could try. I’ve been translating now for eight years. My first project was a novel by the Cuban writer Pedro Juan Gutiérrez, Dirty Havana Trilogy, and since then I’ve worked on books by Mario Vargas Llosa, Gabriel Zaid, Rodrigo Fresán, and Laura Restrepo. When I read The Savage Detectives, I thought it was one of the best novels I had read in any language in years, but I was sure there was no chance I would get to translate it. Bolaño already had a great translator--Chris Andrews. But Andrews couldn't do it, and I was the extremely fortunate runner-up.

The community of full-time translators is definitely small--it's hard to make a living. But there are many great occasional translators--professors, editors, writers.

Amazon.com: We're told that Bolaño towers over his generation of writers (and I can believe it). What did he do that was new? What has his influence been?

Wimmer: Bolaño was (is) the first to make a true break from the legacy of the Boom. Many other writers of his generation, and younger writers, too, have tried and are still trying to make a literature of their own, one that doesn’t languish in the long shadow of García Márquez, Mario Vargas Llosa, and the other novelists who exploded on the world scene in the 1960s. Bolaño made the leap seem effortless. The writers of the Boom put Latin America on the map. Bolaño creates a Latin America of the mind, a post-nationalist Latin America filtered through a rootless, restless, uncompromising literary sensibility.

Amazon.com: Could you describe Bolaño's style and his sentences? (I love his parentheses.) How did you handle the dozens of voices in The Savage Detectives?

Wimmer: Bolaño is both a maximalist and a classicist. He loves to play with excess, with the notion of reckless abandon, but beneath that there is a very careful sense of balance. He was a poet for many years before he became a novelist, and he is an endlessly inventive stylist. But--more rarely for a poet--he also has an unerring sense of character and a palpable fondness for his characters. The Savage Detectives could never have worked otherwise. There are very few writers who could write a novel from the perspective of fifty-odd characters and make each character's story seem urgent and intimate.

From the translator's perspective, some voices were definitely more difficult than others, but I rarely felt that I had to strain to make them distinct from each other. Mostly, it just involved following Bolaño's cues. The hardest thing, oddly enough, was getting the rhythm of his sentences right. There is something syncopated and unpredictable about them that would have been all too easy to smooth over as a translator, and I made a concerted effort not to do that.

Amazon.com: All of his books are full of references to, and appearances by, Latin American writers both fictional and real and I'm sure as a clueless American reader I'm missing hundreds of inside jokes. What's it like to read his work when you actually know the people he's referring to?

Wimmer: It adds a little something, but not as much as you might think. And many of his references are obscure even to Spanish-language readers. There is something cultish and purposefully arcane about the literary world that Bolaño's protagonist, García Madero, yearns to join, and like García Madero, the reader is entranced by authors' names and book titles without knowing exactly where they come from.

Amazon.com: You are working on translating his other giant masterpiece, 2666, the even larger novel that he completed just before his death. How is it going? What can we expect from 2666?

Wimmer: It's an extremely long novel (1100 pages in the Spanish edition ), so it's a test of stamina, but it's going very well. Like The Savage Detectives, it revolves around a lost writer (Cesárea Tinajero in TSD and Benno von Archimboldi in 2666), and the crucial episodes take place in the north of Mexico, but it is a darker book. The lurking sense of dread that many of the characters feel in TSD becomes something more palpable and sharply defined in 2666, and is linked to the killings of women in the Mexican city of Santa Teresa (modeled on Ciudad Juárez) and the legacy of the wars of the 20th century, particularly World War II.

Roberto Bolaño was born in Santiago, Chile, in 1953. He grew up in Chile and Mexico City, where he was a founder of the Infrarealist poetry movement. His first full-length novel, The Savage Detectives, received the Herralde Prize and the Rómulo Gallegos Prize when it appeared in 1998. Roberto Bolaño died in Blanes, Spain, at the age of fifty.