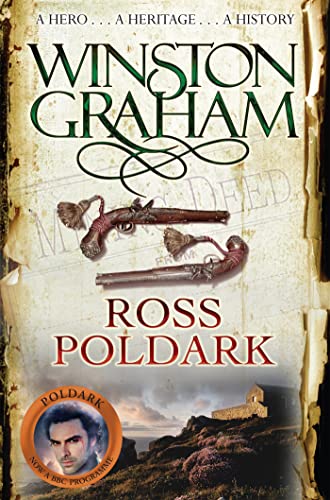 A gorgeous new release of the heartwarming and hilarious first novel in the Poldark series, the subject of the landmark BBC series and the new series on Masterpiece™ on PBS®

Ross Poldark is a heartwarming, gripping, and utterly entertaining saga that brings to life an unforgettable cast of characters and one of the greatest love stories of our age.

Ross Poldark returns to Cornwall from war, looking forward to a joyful homecoming with his family and his beloved Elizabeth. But instead he discovers that his father has died, his home is overrun by livestock and drunken servants, and Elizabeth, having believed Ross dead, is now engaged to his cousin. Ross must start over, building a completely new path for his life, one that takes him in exciting and unexpected directions...

Thus begins an intricately plotted story spanning loves, lives, and generations. The Poldark series is the masterwork of Winston Graham, who evoked the period and people like only he could, and created a world of rich and poor, loss and love, that readers will not soon forget.

Winston Graham was the author of forty novels. His books have been widely translated and his famous Poldark series has been developed into two television series in twenty-four countries. Winston Graham was a Fellow of the Royal Society of Literature and in 1983 was awarded the OBE.

Ross is one of literature's great heroes ... [with] elements of Darcy, Heathcliff, Rhett Butler and Robin Hood -- Debbie Horsfield

Shipping: US$ 9.13
From United Kingdom to U.S.A.
Destination, rates & speeds

Shipping: US$ 5.27
From United Kingdom to U.S.A.
Destination, rates & speeds

Shipping: US$ 11.22
From United Kingdom to U.S.A.
Destination, rates & speeds

Book Description Pan Books, 2008. Paperback. Condition: New. 1st. Paperback. A reissue of the first of the legendary Poldark series Cornwall in the 1780s: When powerful forces of revolution and reaction are at large in the world. Tired from a grim war in America, R.Shipping may be from multiple locations in the US or from the UK, depending on stock availability. 464 pages. 0.310. Seller Inventory # 9780330463294

Shipping: US$ 14.05
From United Kingdom to U.S.A.
Destination, rates & speeds

Book Description Pan Macmillan, 2008. Paperback / softback. Condition: New. New copy - Usually dispatched within 4 working days. The first book in the legendary Poldark series introduces Ross Poldark as he returns home to Cornwall and faces the changes that have taken place in his absence. Seller Inventory # B9780330463294

Shipping: US$ 16.79
From United Kingdom to U.S.A.
Destination, rates & speeds