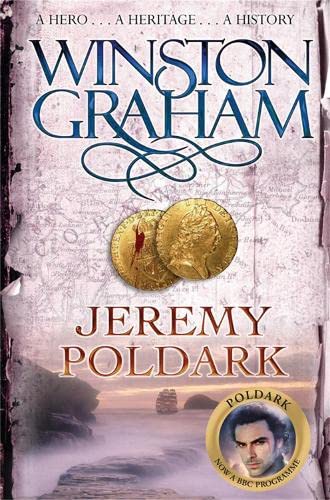 Winston Graham was the author of forty novels. His books have been widely translated and his famous series has been developed into two television series shown in 24 countries. Winston Graham was a Fellow of the Royal Society of Literature and in 1983 was awarded the OBE.

In August 1790 three men rode along the mule track past Grambler Mine and made towards the straggling cottages at the end of the village. It was evening and the sun had just set; clouds had been driven up the sky by a westerly breeze and were beginning to flush with the afterglow. Even the mine chimneys, from which no smoke had issued for best part of two years, took on a matured mellow colour in the evening light. In a hole in the taller of the two, pigeons were nesting, and their flapping wings beat against the wider silence as the men passed. A half dozen ragged children were playing with a homemade swing suspended between two of the sheds, and some women standing at the doors of cottages, hands on elbows, watched the horsemen ride by.

They were soberly dressed, respectable riders in a clerkish black, and they sat their horses with an air of importance; not many such were seen nowadays in this half-derelict, half-deserted village which had come into being and had existed solely to serve the mine and which, now that the mine was dead, was itself perishing of a slower decay. It seemed that the men were going to pass right through-as might have been expected-but at the last, one nodded his head and they reined in their horses at a more dejected-looking shack than anything they had yet seen. It was a one-story cob hut with an old iron pipe for a chimney and a roof patched and re-patched with sacking and driftwood; and at its open door on an upturned box sat a bowlegged man sharpening a piece of wood. He was under the average height, strongly built, but getting up in years. He wore old riding boots bound with string, yellow pigskin breeches, a dirty grey flannel shirt which had lost one sleeve at the elbow, and a stiff black leather waistcoat, whose pockets bulged with worthless odds and ends. He was whistling almost soundlessly, but when the men got down from their horses he unpursed his lips and looked at them with wary bloodshot eyes; his knife hung over the stick while he sized them up.

The leader, a tall emaciated man with eyes so close together as to suggest a cast, said:

"Good day. Is your name Paynter?"

The knife slowly lowered itself. The bowlegged man put up a dirty thumbnail and scratched the shiniest spot on his bald head.

The other made a gesture of impatience. "Come, man. You're either Paynter or you're not. It's not a subject on which there can be two opinions."

"It is Paynter," said one of the men behind. "Where's your wife, Paynter?"

"Gone Marasanvose. Now if you be wanting she..."

"My name is Tankard," said the first man sharply. "I'm an attorney acting for the Crown in the coming case of Rex versus Poldark. We want to ask you a few questions, Paynter. This is Blencowe, my clerk and Garth, an interested party. Will you lead the way inside?"

Jud Paynter's wrinkled teak-coloured face took on a look of injured inno­cence, but under this conventional defence there was a glint of genuine alarm.

"What are ee coming troubling me for? I said all I had to say afore magistrates, an' that were nothing. 'Ere I am, living a Christian life like St. Peter himself, sitting before his own front door interfering with no one. Leave me be."

"The law must take its course," said Tankard, and waited for Jud to get up.
After a minute, glancing suspiciously from one face to the other, Jud led the way inside. They seated themselves in the shadowy hut, Tankard staring distaste­fully about and lifting his coattails to avoid the litter as he sat down. None of the visitors had delicate noses, but Blencowe, a pasty, stooping little man, looked back wistfully at the sweet evening outside.

Jud said: "I don't know nothing about'n. You're barking up the wrong door."

"We have reason to believe," said Tankard, "that your deposition before the examining justice was false in every particular. If-"

"You'll pardon me," said Garth in an undertone. "Perhaps you'd be letting me speak to Paynter for a minute or two, Mr. Tankard. You remember I said, afore we came in, that there's more ways..."

Jud turned his bulldog eyes upon his new adversary. He thought he had seen Garth before, riding through the village or some such. Snooping perhaps.

Garth said in a conversational, friendly tone: "I understand you were Captain Poldark's servant at one time, you and your wife, for a great many years and for his father afore him?"

"And after working faithful for him all those years you were suddenly put off, turned from the house without a word of warning."

"It is said, mind you, this is but hearsay, y'understand, that he treated you shameful afore you left-for some fancied misdeed-used his horsewhip and near drowned you under the pump. Would that be so?"

Jud spat on the floor and showed his two great teeth.

"That's against the law," interposed Tankard, squinting down his long thin nose. "Offences against the person: common assault and battery. You could have proceeded, Paynter."

"And it can't have been the first time, I'll wager," said Garth.

"No, nor it wasn't either," Jud said after a minute, sucking at his teeth.

"People who ill-treat faithful servants don't deserve them these days," said Garth. "There's a new spirit abroad. Every man is as good as his neighbour. Look what be happening in France."

"Ais, I d'know all about that," said Jud, and then stopped. It wouldn't do to let these prying busybodies into the secret of his visits to Rocco. All the time this Poldark stuff might be a blind to trap him into other admissions.

"Blencowe," said Tankard. "Have you the brandy? We could all do with a tot, and no doubt Paynter will join us."

...The afterglow faded, and the shadows in the littered hut grew darker.

"Take it from me," said Garth, "the aristocracy is finished. Their day is over. Common men will be coming into their rights. And one of their rights is not to be treated worse than dogs, not to be used as slaves. D'you understand the law, Mr. Paynter?"

"The Englishman's house is his castle," said Jud. "And habeas corpse, and thou shalt not move thy neighbour's landmark."

"When there's trouble at law," said Garth, "like what there was here in January, it's often hard for the law to act like it should. So it acts as best it may. And when there's riot and wrecking and robbery and suchlike, it says nothing about those who follow if so be as it can lay hold on those who lead is plain to be seen."

"No mebbe about it. But reliable evidence is hard to come by. Evidence of
responsible men like yourself...And, mind you, if the law sees it cannot prove a case against the ringleader, then it will look further and smoke out the lesser men. That's the truth of it, Mr. Paynter, as sure as I'm sitting here; so it's best for all that the right man should stand in the assizes."

Jud picked up his glass and set it down again, it being empty; Blencowe hastily proffered the brandy bottle. There was a comfortable bobbling sound as Jud upended it.

Book Description Pan MacMillan, United Kingdom, 2008. Paperback. Condition: New. Unabridged edition. Language: English. Brand new Book. Jeremy Poldark is the third novel in Winston Graham's hugely popular Poldark series, which has become a television phenomenon starring Aidan Turner.Cornwall 1790. Ross Poldark faces the darkest hour of his life. Accused of wrecking two ships, he is to stand trial at the Bodmin Assizes. Despite their stormy married life, Demelza has tried to rally support for her husband. But there are enemies in plenty who would be happy to see Ross convicted, not least George Warleggan, the powerful banker, whose personal rivalry with Ross grows ever more intense.Jeremy Poldark is followed by the fourth book in this evocative series, Warleggan. 'From the incomparable Winston Graham. who has everything that anyone else has, then a whole lot more.' Guardian. Seller Inventory # AWC9780330463355

Book Description Pan Macmillan. Soft cover. Condition: New. The third Poldark novel begins with Ross Poldark in great trouble, accused of wrecking two ships. He has to be tried, and there are many who would be happy to see Ross convicted, including the powerful George Warleggan whose hate for Ross grows more and more intense. Seller Inventory # 9780330463355