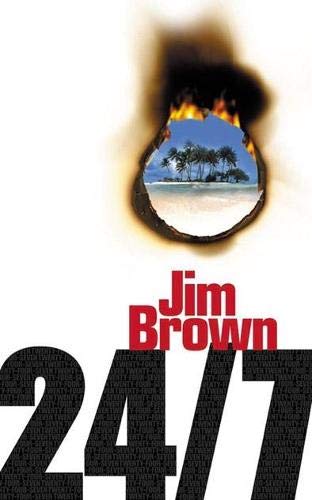 The setting is a reality-based TV show on a remote desert island. Viewers from all round the world have complete access - 24 hours a day, 7 days a week - as twelve very different contestants confront their greatest fears, in expectation of a winning payoff of two million dollars. But then someone very sinister steals the show, when a mysterious voice called CONTROL explains that each participant is harbouring a lethal virus, fatal within twenty-four hours without a daily vaccine. Each day one of the contestants will not receive this vaccine . and it's up to the viewing public to decide which one of them to 'evict'. What will the doomed players do in their desperation to win viewer support? Which of them will win through to become the sole survivor? And who is the secret mastermind calling himself CONTROL?

mall Caribbean island a woman joins the newest reality TV show: 24/7. For Dana Kirsten, winning the $2 million prize could mean saving her child’s life. But while the country watches her every move, Dana is entering a fight for her own life–and a conflict that will shake the world. . . .

Vassa Island has been rigged with remote control cameras, a surveillance satellite system, and the most powerful television transmitter ever created. And that’s not all. For a small fee, anyone with a computer can access any of the 638 cameras live twenty-four hours a day, seven days a week–and vote as twelve carefully chosen contestants struggle with each other and the island. But only fifteen minutes into the first live broadcast, the show’s host and crew die a ghastly death. The shell-shocked contestants hear a voice echoing from hidden speakers: “I am Control, and this has just become the ultimate reality show.”

"247 is a fast-paced, intense, impossible-to-put-down page-turner that takes place in the growing world of reality television--only in this case the stakes are ratcheted up considerably for both winners and losers. Readers who like their novels racing like a roller coaster will enjoy Jim Brown's debut from first page to last."
--John Katzenbach
"247 will keep you up 247. Jim Brown's debut, a nightmarish twist on reality TV, is a finger-burning page-turner that you won't be able to put down. The tribe has spoken: 247 is a winner."
--Harlan Coben