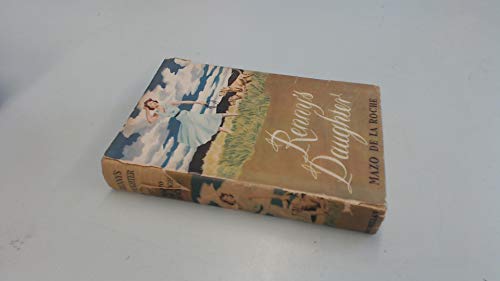 First published in 1951, in Renny?s Daughter, Adeline Whiteoak is voyaging overseas. It is now 1948, and she travels with her Uncle Finch and cousin Maurice to Ireland and then London. On the ship she meets a charming Irishman and falls in love. However, when scandal breaks, she embodies her namesake and refuses to give him up. Meanwhile, back home, Jalna?s peace and beauty is threatened by a neighbour?s speculative designs. This is book 14 of 16 in The Whiteoak Chronicles. It is followed by Variable Winds at Jalna.

It is 1948, and Adeline Whiteoak is voyaging overseas with her Uncle Finch and cousin Maurice. Onboard she meets a charming Irishman and falls in love, which leads to scandal. Back in Canada, death and destruction plague the Jalna household.

Mazo de la Roche, in 1927, was an impoverished writer in Toronto when she won a $10,000 prize from The Atlantic Monthly for her novel Jalna. The book became an immediate bestseller and was eventually adapted for stage, screen, and television.